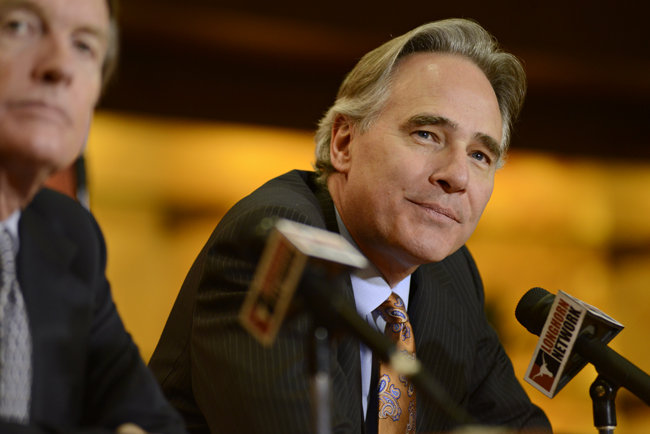 In the latest edition of the Texas Monthly Talks interview series, Texas Men’s Athletic Director Steve Patterson sat down with Texas Monthly Editor-in-Chief Brian Sweany at the AT&T Executive Education and Conference Center on Monday evening to discuss his vision for Longhorn athletics and his role as athletic director.

Patterson, who was featured alongside football head coach Charlie Strong on the cover of Texas Monthly’s September edition, shed light on topics ranging from Strong’s now-famous five core values to his plans for expanding the Longhorns’ global brand.

Throughout the interview, Patterson drew upon his experience in both professional sports and as the athletic director at Arizona State University to answer questions.

Arguably his most important decision in his first months as athletic director was hiring Strong. Patterson said, while the success of the football team is critical to the athletic department, he was not overwhelmed by fear of failure in making the decision.

“I’m not unmindful of the fact that, if the football team doesn’t play well, at or above expectations, you’re not going to be able to successfully drive the business, and I think everybody understands that,” Patterson said. “But I don’t go into the day being afraid that, ‘Oh God, this is gonna blow up and this is gonna be the end of the world.’ I go in trying to gather as much information as I possibly can, look at the criteria, see who fits that criteria for a particular position.”

Patterson also outlined his plan for creating endowments for all UT sports, which would entail raising money for individual sports to make them self-sustaining. He said he hopes to build the global brand of the Longhorns by playing international games, such as the mens’ basketball game scheduled for China in 2015.

“The University athletic teams really are the front porch of the University; it’s the way we tell our stories to the world,” Patterson said. “There are four, five, six potential international brands in college athletics. We’re one of them. If we don’t leverage it, we haven’t done our job.”