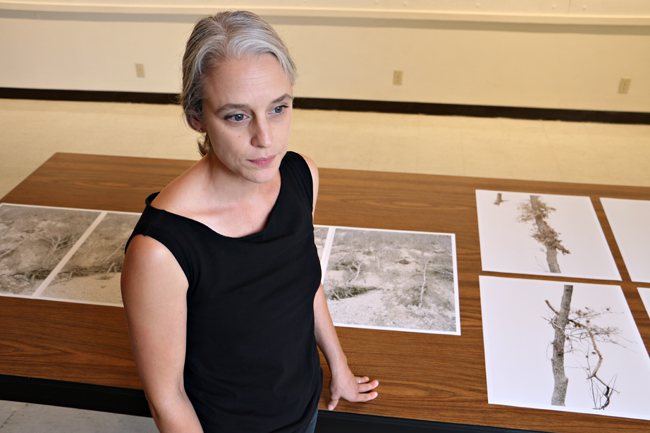 After the October 2013 floods in Austin, Anna Collette, a studio art assistant professor who specializes in photography, discovered the perfect subject for her new series of photos: the destruction of South Austin’s Onion Creek.

Her collection of photos is featured in the exhibit “Gathering Ground,” which will soon be displayed in the Courtyard Gallery at the AT&T Executive Education and Conference Center on campus. The exhibit is Collette’s first in Austin.

The photos display trees, limbs and brush mixed with debris from the flood. Any color in the area is covered with gray dust, making many of the photos appear black and white. Collette visited Onion Creek three months after the October storm and became fascinated with its monochromatic coloration.

“What was interesting to me was that the landscape looked almost like the opposite of a flood,” Collette said. “It was dry, ashen.
Whenever I think about a flood, I think of a massive amount of water, but this is really what was left.”

Collette didn’t anticipate photographing trees in Texas, but then she discovered the damage of the storm at Onion Creek.

“I’m from the Northeast, and, living in Massachusetts and New York, the trees and the growth [are] so dense, so, when I moved to Texas, I thought, ‘Great, I don’t have to photograph trees anymore,’” Collette said. “But then I saw this, and I felt that there was a story to tell.”

The title of her collection, “Gathering Ground,” describes the cluttered mass of trees and debris featured in the photos.

“I wanted the title to speak to both the gathering of trees and how they came together and also the idea of a mating ground — a place where people and things gather,” Collette said. “I went through a lot of other variations, but I liked having both of those ideas at the same time.”

Collette, who has been a professional photographer for 12 years, became interested in photography during her sophomore year at the Massachusetts College of Art and Design.

“I was a painting major, but I took an elective in photography, and I really enjoyed the process of it,” Collette said. “I liked the idea that photography is a subtractive process. Photography is almost the opposite [of painting], where you’re going out into the world to create a composition or to create meanings from something that already exists.”

Since receiving her bachelor’s degree from Massachusetts College of Art and Design and getting a Master’s of Fine Arts from Yale University, Collette has had her work featured in galleries in Boston and New York. She came to Austin a year ago to teach photography and studio art at UT and has been busy since.

“I’ve actually been very productive this year since moving here because I’ve been inspired by the landscape,” Collette said.

Collette’s photos will be on display from Thursday through Feb. 6.