Horns breeze past cyclones in three 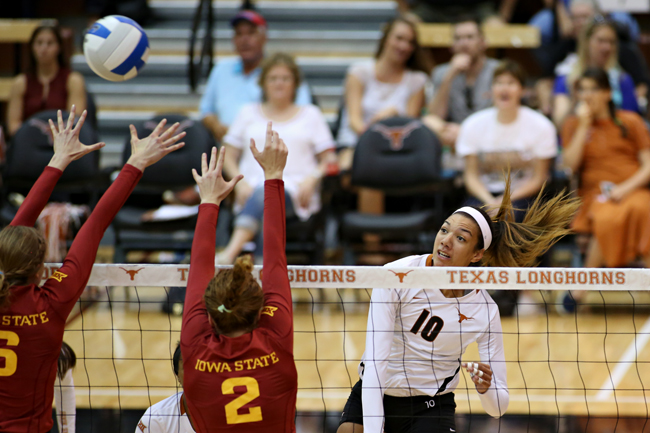 “We made a few too many errors in game one,” head coach Jerritt Elliott said. “I thought we put some nice things together. Then we smoothed out, and I think we took control of the match. It felt a lot closer than scores did, but I think we got better as the match went on. I liked what I saw.”

Texas swept the Cyclones (25-23, 25-15, 25-15) in its first home game since Sept. 13. The Longhorns opened up the first set with some nerves as they committed some surprising errors. Texas was able to squeeze past Iowa State 25-23 in the opening set thanks to six kills by senior outside hitter Haley Eckerman.

“It was great to finally have the stands for us and not against us and not have to go 15 [players] against 8,000 and 15 against whatever West Virginia had,” Eckerman said. “It was great for us to kinda get back into our routines and just play at home and get as comfortable as possible.”

While Iowa State gave Texas trouble in the first set, the Longhorns were able to find their stride in the second set as they calmed down. Senior middle blocker/outside hitter Khat Bell said the team was able to rely on the coaching staff to push them through their early game struggles.

“The coaches keep reminding us just to relax and play through it and stay focused,” Bell said. “[We have to] make sure we’re managing our game. We just can’t get riled and pushy when things aren’t going our way.”

Alongside Bell’s performance in the second set, Eckerman continued to play well as she added six more kills to her total. Texas also got help from sophomore setter Chloe Collins as she recorded nine assists in the second set. The Longhorns claimed the second set with a 25-15 win.

Texas used the momentum from the second set to close out the match in the third. Iowa State fought valiantly early in the third set, but the Longhorns were too much for Iowa, as the Texas claimed a 25-15 win in the third set.

With the victory, Texas remained undefeated this season and pushed its Big 12 winning streak to 18 games. The Longhorns have yet to drop a set this season in Gregory Gym.

Despite claiming a seemingly easy victory, Elliott says the team must play better if they want to beat Kansas on Sunday.

“Kansas is a big time match for us,” Elliott said. “They’re playing at the highest level along with Kansas State, so we’re going to have to play better than we did tonight to come out with a ‘W.’”