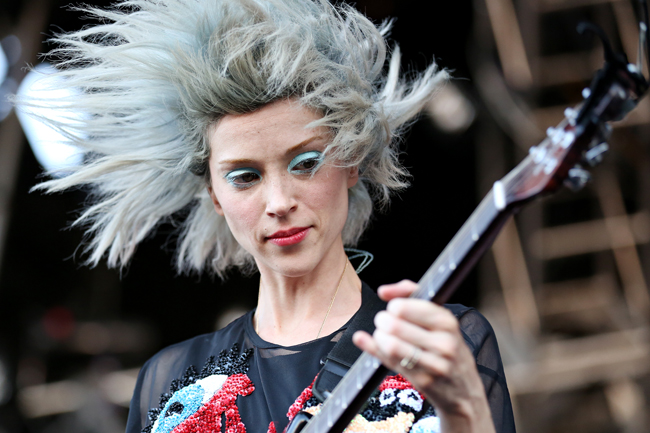 Clad in Converse tennis shoes, shady hats and countless metallic temporary tattoos, festival-goers welcomed the first weekend of the Austin City Limits Music Festival with open arms. With a lineup just as up-to-the-minute as the fashion trends, the weekend was packed with must-see shows. Here is a recap of The Daily Texan’s most memorable ACL
performances:

The Scottish synth-pop trio woke up Friday’s drowsy crowds with a lively performance. While their stage presence could have been filled with the typical flashiness of an electronic show, the band opted for a more understated setup, letting front woman Lauren Mayberry’s energetic vocals stand out on hits like “Recover” and “The Mother
We Share.”

St. Vincent’s live performances define her as an artist: calculated but with room for improvisation. Annie Clark took to the stage Friday evening looking ethereal, delivering a dreamy performance grounded with sharp choreography and heated guitar riffs. “The reason you’re here and the reason we’re here is because we never gave up hope,” Clark said to the cheering, fan-filled audience.

Foster the People sounded better live at the Samsung Galaxy Stage on Friday evening than it does on its albums. Lead vocalist Mark Foster was calm and relaxed while his bandmates brought energy to the performance. Dedicated fans sang the words to every song, helping those who only knew the band’s smash hit, “Pumped Up Kicks,” to stay upbeat throughout the show.

The majority of Beck’s set came from his upbeat, late ’90s and early 2000s albums. Straying from the expected, the rocker played his most well-known hit, “Loser,” early on in the set. Beck commented on the audience’s lackluster energy and proceeded to slow down the pace by playing music from his 2014 release, Morning Phase.

“Hey, I’m Mac. I’m here to play some music,” the Canadian singer-songwriter said as he entered the RetailMeNot stage, a cigarette in hand. DeMarco took to ACL in his typical slacker style, performing a laid-back set from his latest album, Salad Days, punctuated with lewd jokes, conversations with audience members and dreamy guitar melodies.

The Australian rapper’s crowd Saturday afternoon was so huge that it could easily have been a headlining audience. While most of her songs were her originals, Azalea also incorporated feature tracks, such as Ariana Grande’s “Problem.” When she sang her signature “Who dat? Who dat?,” a screaming crowd replied with an enthusiastic “I.G.G.Y.”

An hour before Eminem was scheduled to appear on stage, the crowd had already started chanting. “Marshall! Marshall!” and “Shady! Shady!” Marshall Mathers did not disappoint, performing songs from each of his albums, such as “The Real Slim Shady” and “Without Me.” After finishing his set list, Eminem returned with an encore of “Lose Yourself” as the crowd jumped along to a spectacular finale to end the night.

Outfitted in all black despite the afternoon heat, the alternative punk rockers performed a heavy set on the Honda Stage. The unshakable fans defined AFI’s performance, supporting a stage dive from lead singer Davey Havok within the first two songs of the set.

Just as the sun was beginning to set Sunday evening, Jenny Lewis took the Austin Ventures Stage dressed in her trademark pastel blazer. Opening with Rilo Kiley’s “Silver Lining,” Lewis paid homage to her former band and followed with tracks from her latest solo album, The Voyager.

To see more photos from Weekend one of Austin City Limits, check them out here –