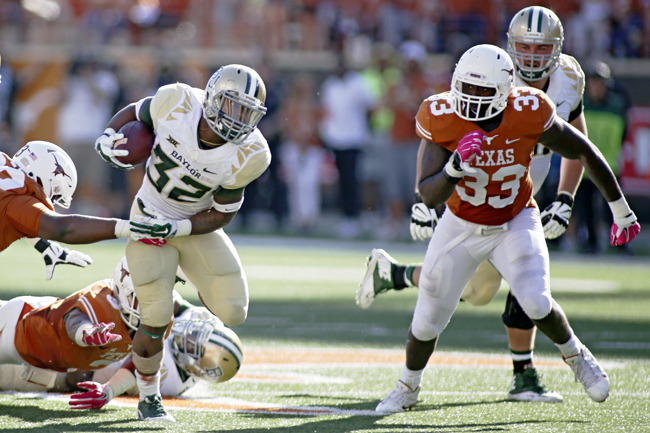 Although Texas’ 2-3 record doesn’t quite reflect it, the Longhorn defense stands strong this season. The Baylor offense entered Saturday’s game ranked highly, averaging 56.8 points, 641 total yards and 401.3 passing yards per game. Unfazed, the Texas defensive line cut each of those numbers by at least 40 percent: down to 28 points, 389 yards of total offense and just 111 passing yards. Numerous players contributed to the Longhorns’ defensive efforts, but senior linebacker Steve Edmond stood out above them all.

“With 17 tackles and a sack, [Edmond] is getting better and better,” head coach Charlie Strong said. “You’d like for him to be a little more vocal because the way he plays the game, players all respect him. But the game he had on Saturday, he was very good.”

As Strong said, Edmond’s leadership style is far from vocal. He prefers his actions to speak louder than his words, and his production accomplishes just that. Edmond’s seven tackles for loss ranks second on the team after junior defensive tackle Malcom Brown. In addition, with a career-high 17 tackles and two sacks against Baylor this weekend, Edmond trails senior linebacker Jordan Hicks’ 69 total tackles by just four.

“[Edmond] and Hicks are real consistent players on the defense,” Strong said.

This consistency doesn’t come without hours of preparation. And it’s this preparation combined with Edmond’s stats that has gained his teammates’ respect. Hicks said Edmond spends hours in the film room with Strong and linebackers coach Brian Jean-Mary. While analyzing footage with coaches, Edmond isn’t afraid to ask questions to better understand schemes. Hicks said Edmond works toward one goal: understanding the game well enough that he’s always on the same page as the rest of the team. Through five games in 2014, Edmond certainly has been.

“It’s his preparation,” Hicks said. “He’s going into the game prepared, taking it very seriously this year. That’s been key for him — going out able to play fast and play confident. He’s doing a great job for us.”

Without redshirt senior center Dominic Espinosa and former quarterback David Ash to lead the offense this season, the Longhorns have needed players like Edmond to have great performances. Redshirt senior receiver John Harris said the offense knows it’s not pulling its weight, but it also appreciates the defensive compensation. Harris said he finds it comforting to know that if the offense can pull it together, it won’t have to worry about the defense resulting in losses.

“You can get numb to [losing], and I’m not saying you want to get used to losing, but we want to change it,” Harris said. “If we can just get on a roll and score some points — our defense is playing great, and we can get these younger guys moving forward and learning how to play football games.”

Harris and fellow offensive players know that if they eliminate the small errors, they’ll be able to get on a roll. All it takes is some extra practice, time in the film room and asking the necessary questions to get on the same page as the team. The strategy works, and Edmond can vouch for it. And if he’s not vocal enough to vouch for it on his own, his 17 tackles against Baylor will speak
for themselves.