Student protests in Hong Kong could determine future of democracy 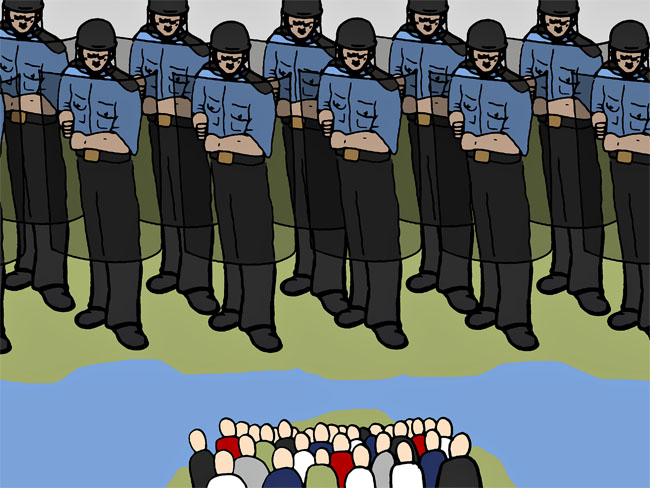 The future of democracy might rest on the shoulders of courageous student protesters in Hong Kong. Thousands of young men and women on the island have taken to the streets to stall Chinese efforts at rigging local elections. Hong Kong enjoys greater political freedoms than any other part of China, and Beijing now wants to end that. If the Chinese leadership succeeds, this will have a chilling effect far beyond the mainland of Asia. Democratic activists and their government repressors in Myanmar, Vietnam, Thailand and even Russia are watching.

The British Empire wrested Hong Kong from the Chinese Emperor in 1842 as a forced indemnity following the First Opium War. The British coerced the Chinese into importing opium, and they seized a key trading post off the southern coast of the mainland. During the next 155 years Hong Kong became a center for British trade, a magnet for wealth and a creative space for free thinkers who merged British and Chinese language and culture. Hong Kong was part of London’s imperial system, but it also emerged as a thriving island of capitalism and democracy.

The Chinese government regained control over Hong Kong in 1997, as part of a treaty negotiated with Britain to rescind the imperialist imposition from the prior century. Beijing promised to protect the unique culture of Hong Kong, including its free market system and its freedom of speech. Citizens of Hong Kong embraced a future with China, but they expected the right to elect local leaders who would guard their autonomy from the suffocating dominance of the Chinese Communist Party.

Many observers questioned whether this agreement could ever work. How long would Beijing allow an island of freedom to operate within a larger political system that restricted speech and political choice? Would Chinese leaders feel compelled to change Hong Kong, fearful that otherwise it might change the mainland?

Optimists, myself included, hoped that Hong Kong would become a beachhead for democratic change, spreading throughout China. In 1989, student protests for greater freedom in Beijing’s Tiananmen Square and other urban areas brought this hope close to reality. We now know that democracy activists were tantalizingly close to convincing Chinese Communist Party leaders to undertake the kinds of democratic reforms they have never allowed. Frightened by what this would mean for their power, China’s most elite figures chose military repression in place of reform, ordering what became a bloody massacre of students. The crackdown carried to Hong Kong, but Beijing’s leaders were careful not to alienate foreign countries, including the United States, by closing off all democracy on the island.

In the last few months, China has stepped beyond these limits. Beijing will now require that any candidate for chief executive of Hong Kong have prior approval on the mainland. This restriction of political choice for island residents —  a clear violation of local democratic institutions — is part of a broader campaign to give the Chinese Communist Party a stronger hold over communications, trade and all forms of political opinion. Chinese leader Xi Jinping wants to stamp out any pressure for reforming his autocratic government. He hopes to make Hong Kong’s “special administrative region” into another cowering province under the dominance of the Communist Party.

This is more than just a political struggle. It is a conflict that will determine the possibilities for democracy throughout Asia, in the shadow of a stronger and wealthier China. The students who are protesting want to be loyal to China and to their hopes for democracy. They are unwilling to give up their freedoms and their choice of leaders. They want to determine their own future, without the uncompromising dominance over professional opportunities and political authority that the Community Party wields on the mainland.

The United States and Europe have been much too silent about events in Hong Kong. We are watching with sympathy, but doing little else. Our passivity reflects fatigue with failed democratic movements, especially the Arab Spring, and preoccupation with crises in Syria, Iraq, Ukraine and other dangerous parts of the world. The democratic struggle in Hong Kong seems distant from our daily concerns.

The future of democracy in Hong Kong and other parts of Asia will, however, affect our lives more than almost anything else. If the most populous continent gives up on democracy, it is unlikely to survive in other parts of the globe. If the Chinese government succeeds in extending its authoritarian control over the entire region, then the trade and access that Americans take for granted will become much less assured. Most important, the denial of democracy in Hong Kong will be yet another defeat for the free hopes of young entrepreneurs against the repressive actions of old dictators.

Americans, especially those on college campuses, must speak up in support of the Hong Kong students. We are part of their struggle for a more democratic, just and peaceful world. We can help them by raising our voices, and inspiring others to do the same.  We can help them by showing that we care.

Suri is a professor in the LBJ School of Public Affairs and the Department of History.