While rest of the Big 12 battles, Texas remains on top 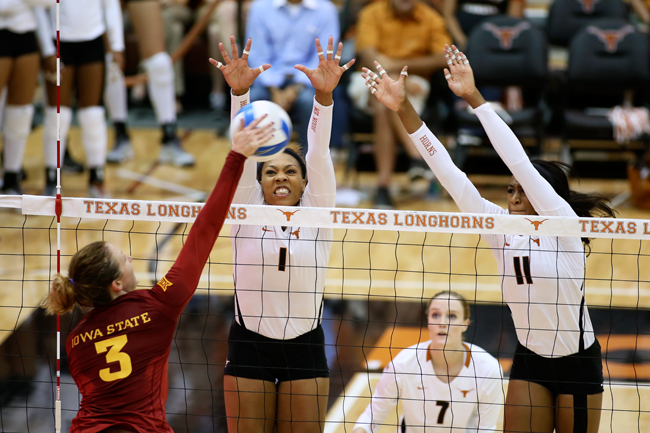 Through a week-and-a-half of conference play, the Big 12 is proving to be unpredictable.

Kansas, who came into the conference schedule ranked No. 23, is winless in Big 12 action. Texas Tech was undefeated but has since dropped two games at home. And TCU, who has won only four matches in conference play each of the past two seasons, has already tallied two wins, including a 3-1 upset over Iowa State.

But the one constant in the conference, as it has been the past couple of seasons, is Texas.

After a tough 3-1 win against Kansas on Sunday, the Longhorns upped their conference winning streak to 19 games and sit atop the Big 12 undefeated, poised to take their fourth-straight conference title. But, with Texas in the middle of a three-games-in-five-days span playing Baylor on Tuesday, head coach Jerritt Elliott said they still have to be prepared to play.

“It’s nice to be home, but we’ve got to be ready to go by [tonight] against Baylor,” Elliott said.

While they’ve opened up the season 11-0 and are 3-0 in the Big 12, the Longhorns haven’t played perfect volleyball in their first three conference matches.

On Sept. 24, Texas opened up conference play by dropping the first two sets at West Virginia. The Longhorns combined for 19 attack errors and 12 service errors in those two sets while compiling a .269 hitting percentage.

In their latest match Sunday, the Longhorns dominated the match against the Jayhawks except for the second and third sets. In the second set, after an almost flawless first set, Texas struggled to score, totaling only nine kills and a .081 hitting percentage but managed to win the set 25-20. The Longhorns weren’t quite as lucky in the third set, only firing eight kills as the Jawhawks hit 14 kills to win the set 25-20.

“It’s part of this game,” Elliott said. “It’s happening around the country. We’re not the only ones going through this. What makes the great teams great is that they don’t go through those cycles a lot.”

One of the striking things about this Longhorn team is the balance they have shown through 11 matches this season. While senior outside hitter Haley Eckerman and senior middle blocker Khat Bell are names most Texas fans know, neither of them are in the top 10 in kills in the Big 12 — in fact, no Longhorn is in the top 10 in that category. But the Longhorns are first in the conference with a .277 hitting percentage and the fewest attack errors.

The Bears come into this match as a difficult team to peg down in the Big 12. Baylor leads the conference with 935 kills but is at or near the bottom in nearly every other statistical category. The Bears also took down Kansas State in Manhattan, Kansas, but have lost back-to-back matches against Texas Tech and TCU.

Even against an up-and-down Baylor team, Elliott said his team has a lot of room for improvement.

“There’s a lot of areas where we need to improve on emotionally as well as physically and tactically,” Elliott said. “We’ve still got a lot of work to accomplish.”