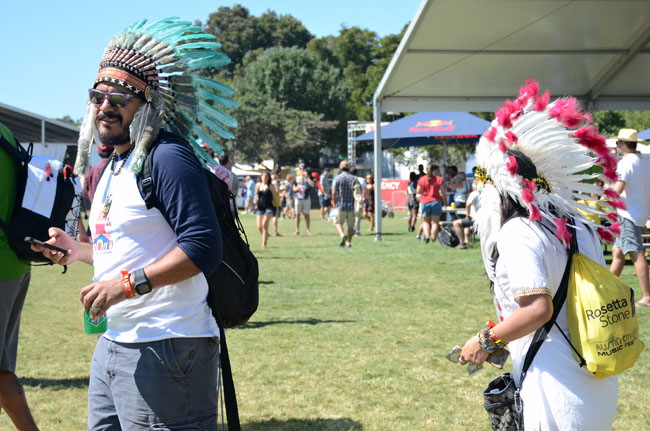 Fall music festivals and Halloween bring opportunities to dress in ways outside of the norm. The boho style is donned at almost every indie music event, while the Oct. 31 holiday allows individuals to be whomever they wish for the night: a superhero, celebrity or even a culture thief. Recent years have turned cultures and customs that many hold dear into a costume. “Fashion” apparently now means making cultural traditions, steeped in history and faith, a fashion statement. But since when is turning a tradition into a costume acceptable?

Let’s start with the most obvious insult — the Native American headdress. Sure, you can purchase one at most costume stores, but even vendors aren’t sensitive to the meanings behind them. A quick look at an American history textbook shows many tribe members, but this elaborate head piece is reserved for only the most courageous warriors. Although trivialized in trends, it’s the most honorable piece a Native American can wear.  After a brave act, the tribe rewards the warrior with a single feather to add. As their status and admiration in the tribe rise the headdress grows larger. It’s meant to be earned, not bought. Not only did Americans essentially wipe out the race, but now, almost as a trophy for the conquer, we wear their sacred pieces to play dress-up.

Many see the red dot gracing the face of an Indian woman either around campus or in the media. Some find the bindi aesthetically pleasing and used face paint to create their own. Few take the time to research the significance of the dot bindi in Indian culture. While in modern times it can be used as a face decoration for females of all ages in the culture, the bindi originated as a symbol of marriage and status. It is often regarded as a “third eye” as an individual reaches an enlightened spirituality or used as a visual reminder of the goal. Yet again, festivalgoers and costume shops stole this element unique to a specific culture and made it a trivial fashion statement.

The least recognizable cultural appropriation is taken from contemporary black culture. Although the other two examples are more likely to receive a sideways glance from even the most socially unconscious, black culture is seen as the most acceptable to mock and claim for the use of others. Popular magazines and high fashion reintroduced hairdos and accessories such as cornrows, braids, dreads, “baby hairs” and do-rags as innovative and new, even though they originate from black culture.

To those clamoring to justify their offenses, this isn’t meant to attack or divide anyone. You don’t have to throw away your henna kit or tribal print clothes. Simply take the initiative to research the history, the symbolism, the tradition behind the piece, then give credit where credit is due. Have the respect to admire and appreciate another’s culture instead of appropriating it in the name of fashion or dress-up.