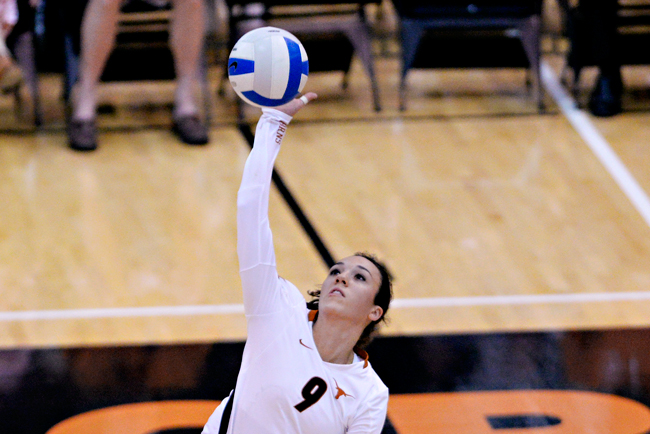 Texas continued to use its depth to its advantage while committing fewer errors against Baylor than in their past several games.

Texas had 28 assists and 30 kills in the match, led by senior outside hitter Haley Eckerman and sophomore middle blocker Chiaka Ogbogu with seven kills each. The Longhorns also recorded 27 digs, led by both Amy Neal, junior outside hitter and libero, and freshman libero Cat McCoy with six a piece. Neal also led Texas in service aces with four, followed by Eckerman and Collins with three.

“Ultimately, [getting] more balance has been great,” head coach Jerritt Elliott said. “I think we’ve had two really great performances from both of our setters in the last two matches. I think we’re getting a better flow and feeling more comfortable about what we’re doing, and, as a result, I thought we were very efficient tonight.”

The Longhorns also were able to keep their errors to a minimum Tuesday. Texas committed 19 attack errors and 12 service errors in its Big 12 opener against West Virginia and struggled to score in the second set against Kansas, only totaling nine kills and a hitting percentage of .081 in that set.

But the Longhorns performed much better Tuesday night, only committing four attack errors, three service errors and three blocking errors against Baylor. Despite the solid performance, Elliott said the team is still looking to get better each game.

“[The players] have pretty high goals and expectations, so it’s about us getting better,” Elliott said. “We know that we’re going to win enough games to get into the tournament. We know at some point we could lose a game, but, as of right now, it’s about really focusing on us and about improving.”

Texas will look to carry its momentum from its win against Baylor when it takes on Texas Tech on Thursday.