Professor discusses Basquiat’s use of appropriation in artwork 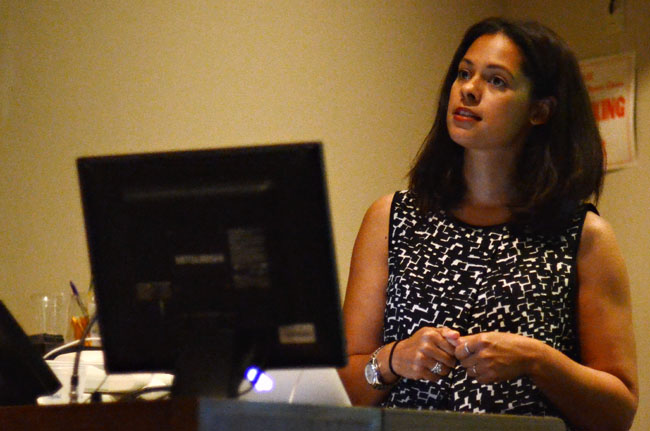 Author Jordana Moore Saggese discussed the artwork of Jean-Michel Basquiat and his style of art appropriation at a lecture at the Doty Fine Arts Building on Tuesday.

According to Saggese, Basquiat was a neo-expressionist artist in the 1980s. He became known for his graffiti artwork in New York City and his fusion of media, words, symbols and inclusion of Jazz into his artwork, as well as his collaboration with artist Andy Warhol.

Saggese, associate professor and chair of visual studies at the California College of the Arts, said Basquiat’s art was primarily appropriation, meaning he used original pieces from other artists as the backdrop for his own work.

“Appropriateness from imitation and copying was used to negotiate a type of originality by Basquiat,” Saggese said.

Basquiat tended to incorporate works from prominent artists, such as Leonardo da Vinci and Pablo Picasso, to create his own work, according to Saggese.

Saggese said Basquiat’s incorporation of reproduced art was likely influenced by his limited access to various pieces of art beside those found in textbooks. According to Saggese, once Basquiat was able to reproduce art through photocopying, he started to combine so many elements and media into his work that it was often hard to look at the work as several different pieces.

“The lines are indistinguishable within the media he used in his work,” Saggese said.

“Basquiat is a prominent figure that can help inspire others’ interest for black artists and their history in art since he took so much time in referencing other artists,” Lomba said.

Saggese is the author of “Reading Basquiat: Exploring Ambivalence in American Art,” which explores Basquiat’s art and his overall influence in art history. She said she has dedicated years to the research of Basquiat’s artwork.

“It was an excellent lecture, and she has a wide range of scholarly expertise for our students to see,” Reynolds said.