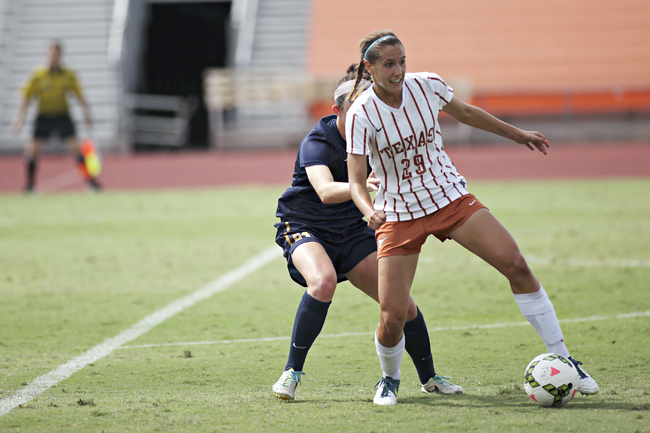 The Longhorns were lucky to stumble through the first 90 minutes of last month’s conference opener against No. 10 Texas Tech without conceding a goal. But Texas was unable to maintain a consistent threat on the Raider net, and Texas Tech sophomore goalkeeper Lauren Watson repelled any serious chances. Neither team had scored when the clock struck 90.

Most teams would look to their veteran players to clutch an overtime game against such an important opponent, but not this year’s Texas team. Seven minutes into the first sudden death period, freshman forward Olivia Brook charged down the right side, received a pass from sophomore forward Jasmine Hart and floated a beautiful shot into the top-left corner of the net for a game-winning goal and a huge upset win. But Brook’s heroics were no fluke. The youngster is leading the team with six goals through 13 games, making her one of the Longhorns’ keys to success this season.

“She doesn’t even know how great she’s been doing for us,” senior midfielder Sharis Lachappelle said. “She just goes out there and makes unbelievable shots and goals. She brings energy in every single practice.”

Brook has thrived in the Longhorns’ possession-based attack, which requires incredible patience; trigger-happy freshmen can often waste shots, which leads to squandered possessions. However, Brook appears immune to that stigma. Twelve of the freshman’s 20 shots have landed on goal for a .600 shots on goal average that eclipses the team’s .441 number.

Brook has been a constant contributor since she stepped onto the field, but the confident freshman expected nothing less from herself in her first year of college soccer.

“I hold myself to pretty high standards,” Brook said. “[Being the leading scorer] is a great feeling, but I don’t really think about that. It’s not about me; it’s how we do as a whole.”

Most college coaches can only dream of getting the chance to work with a player who can contribute in her first months on a college campus. Kelly, though, has not fallen into the trap of pampering her young phenomenon and, instead, believes athletes of any classification should be treated the same.

“As soon as you walk on this campus, I say that you’re no longer a freshman — you’re a Texas Longhorn,” Kelly said. “It’s baptism by fire. If you’re ready to go, and you’re getting the job done, you’re on the field.”

Very few upperclassmen have the talent to upset the elite of college soccer and light up the scoreboard on a regular basis. But Brook has done all of that as a freshman, and, true to her form, the young attacker is still concerned about getting better.

“I am working on my striking; I’m working on my movement,” Brook said. “I’m learning how to get in good positions for my fellow teammates and just working to get in the best spots to score … or just all the movements I need to do to get the team to win.”