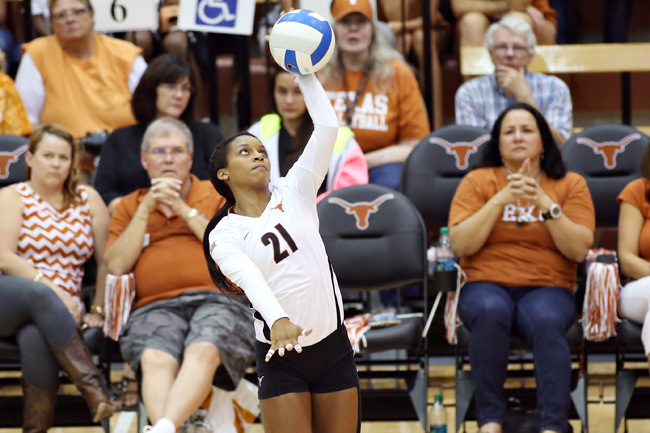 Senior outside hitter Haley Eckerman stepped back to serve in the middle of the first set against Baylor. She threw the ball into the air and slapped it ferociously across the net for a service ace. While it only counted as one point in the first set, it’s just one example of how dominant No. 2 Texas (12-0, 4-0 Big 12) has been in Gregory Gym this season.

The Longhorns have played five games at home and have yet to drop a set. Texas has been able to maintain a perfect record at home because it’s playing well as a team and using its depth and balance to its advantage.

“We’re very balanced, and we’re very deep,” head coach Jerritt Elliott said. “I can only play so many players at a time, but we are very fortunate because we have great chemistry.”

The Longhorns have been able to win every set at home this season because of their defense. In its five games at Gregory Gym this season, Texas has held its opponents to a .130 hitting average.

“Our blocking has been getting better,” Elliott said. “It’s a big part of our practice. We are doing the same thing every single day in the gym, getting good in those areas, and we are starting to see some results from it.”

While Texas is undefeated at home, Elliott said that the team is still working to improve.

“We’ve got a really good group of girls that understands what it takes to be great, and they want that,” Elliott said. “They have pretty high goals and expectations, so it’s about us getting better … But it’s really about focusing. It’s about improving and getting our continuity and getting better in the areas that we are working
on practice.”

Sophomore setter Chloe Collins echoed Elliott’s belief, as she says that the team’s ability to get gel and improve will help them throughout the season.

“I think it’s just going through practice and the same routines,” Collins said. “Over time, we are just starting to gel together. … That translates over into the match what you do in practice, so [we] try to execute that.”

Thursday’s game against Texas Tech will present a challenge, as it will be their third game in five days. While it may be challenging, Elliott said that this will be the only opportunity Texas has to replicate a tournament scenario.

“We don’t get to play back-to-back, so this is the only opportunity, the closest we can, to replicate that and get them use to that and know what that turnaround time is,” Elliott said.

The Longhorns and Red Raiders square off Thursday at 7 p.m.