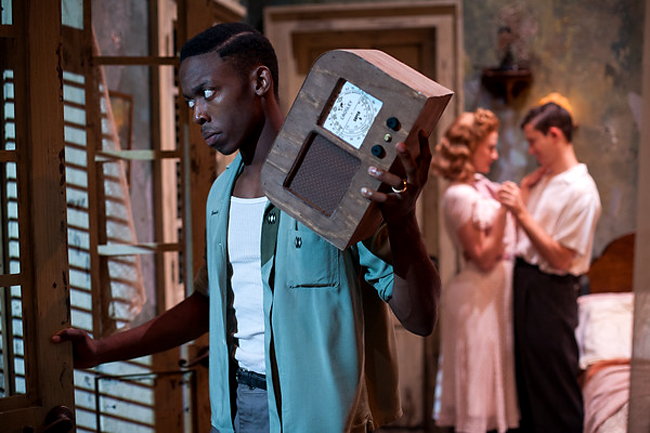 Courtesy of the UT Department of Theatre and Dance

For theatre graduate student and director Jess Hutchinson, Tennessee Williams’ “A Streetcar Named Desire” is about what it means to know another person. Although the play is performed and dissected time after time in American theater, Hutchinson and her actors hope to reach their audience on a personal level.

The UT Department of Theatre & Dance will host “A Streetcar Named Desire” in the Oscar G. Brockett Theatre from Oct. 10 to Oct. 19. The play examines the relationship between aging widow Blanche DuBois, her sister Stella and her brother-in-law, Stanley Kowalski, as she visits their home in 1947. Since its first production, the play has become a classic in popular culture, garnering the most attention after the 1951 movie adaptation starring Vivien Leigh and Marlon Brando.

Hutchinson decided to direct “A Streetcar Named Desire” for her MFA thesis production in part because of its level of familiarity and iconic status.

“We’re around this play quite a bit as we study theater,” Hutchinson said. “I think one of the reasons is because it’s a great play. There’s a reason this play is a major part of the canon.”

Production members spent hours interpreting the text during the first week of the semester.

Acting sophomore Keith Machekanyanga, who plays the lead role of Stanley, said the table reading was a great way to connect with the other actors.

“When it came to rehearsal, it was awesome,” Machekanyanga said. “Hearing everybody’s intelligence, everybody’s creativity and realizing how smart everyone was, I was like, ‘This is going to be awesome.’”

During the table work, the actors found that Williams’ play was a great showcase of their abilities.

“The depth of the script was any actor’s dream to do,” Machekanyanga said. “There’s still some stuff that we haven’t uncovered yet, and that’s what makes it so enticing. We’ve memorized the entire play; we’ve ran through it several times, but there’s still more.”

Both Hutchinson and Machekanyanga avoided watching any film adaptations in order to make the performance their own.

“I’ve never seen [the 1951 film] before I started thinking about doing this play, and I made a conscious decision not to see that movie,” Hutchinson said. “We’ve been trying to really collaborate with the author and working with [his] words, as opposed to someone else’s interpretation.”

Hutchinson said the rehearsal process was made easier and more enjoyable because of her cast members’ work ethics.

“I’m really lucky in my cast,” Hutchinson said. “They’re phenomenal; they’re 12 undergraduate actors, who are working so hard and are bringing such heart and intelligence and really thoughtful work.”

Hutchinson ultimately hopes that audiences will understand the many themes of “A Streetcar Named Desire.”

“I hope they go on the ride with us,” Hutchinson said. “It’s an incredible, emotional journey that Williams crafted.”