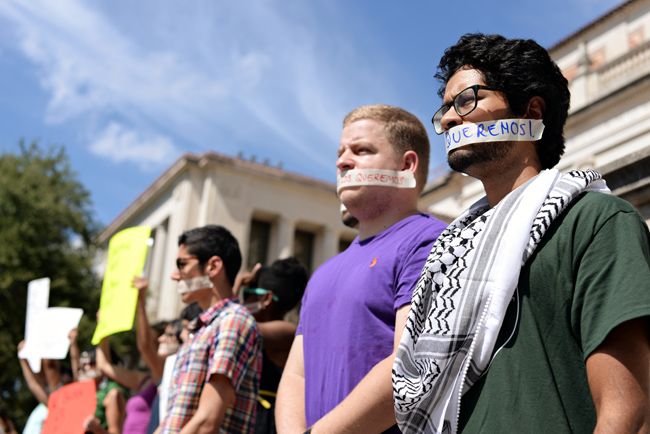 Students and members of the UT community held a protest in front of the Tower on Wednesday to call for justice for 43 students from Ayotzinapa, Mexico, who disappeared after police and civilian gunmen fired upon them in the neighboring town of Iguala.

Latin American studies graduate students organized the protest and held a brief moment of silence in honor of the Mexican students. All 43 names of the missing people were read. After each name, the leaders of the protest in unison with the protesters said, “Lo queremos vivo,” or, “We want him alive.”

Manuel Galaviz, a Latin American studies graduate student who took part in the protest, said freedom of assembly is often taken for granted in the United States, while protesting in Mexico could mean death.

“Being a student in the U.S., we often take for granted that we can hold assemblies and actually protest,” Galaviz said. “We can do it without the fear of being prosecuted by the state or other authorities.”

According to the event’s Facebook page, the 43 students missing from the Normal Rural School in Mexico gathered to raise funds on Sept. 26 for an Oct. 2 protest in the capital. These students, training to be elementary school teachers, were planning to hold a protest against the cutting of funds at their state university.

Six students were killed while collecting funds and others were presumably taken away in police cars. Mass graves with bodies were found in Iguala on Oct. 6, and the Mexican government is currently investigating the possible link between the bodies and the disappearances.

Since the disappearances, relatives and human rights organizations have called for the return of these students and justice from the Mexican government.

“I’m really sad and angry about what’s happening in Mexico and the constant violence and state of repression in my country,” Rodriguez said. “These missing students are also the symbol of how bad the situation is in Mexico, and the repression against citizen voices. These students were fighting for their rights, and the message that the government gave them was, ‘You just have to shut up.’”

Rebecca Jackson, Latin American studies graduate student and one of the protestors, said the protest is a call to put an end to the Mexican government’s lack of action.

“There is a history of disappearances and murders of which the Mexican government doesn’t answer or blames it on narco forces, and they claim that there is no way of finding out what happened,” Jackson said.  “We are here to take a stand on this long line of history, as it is simply out of control.”