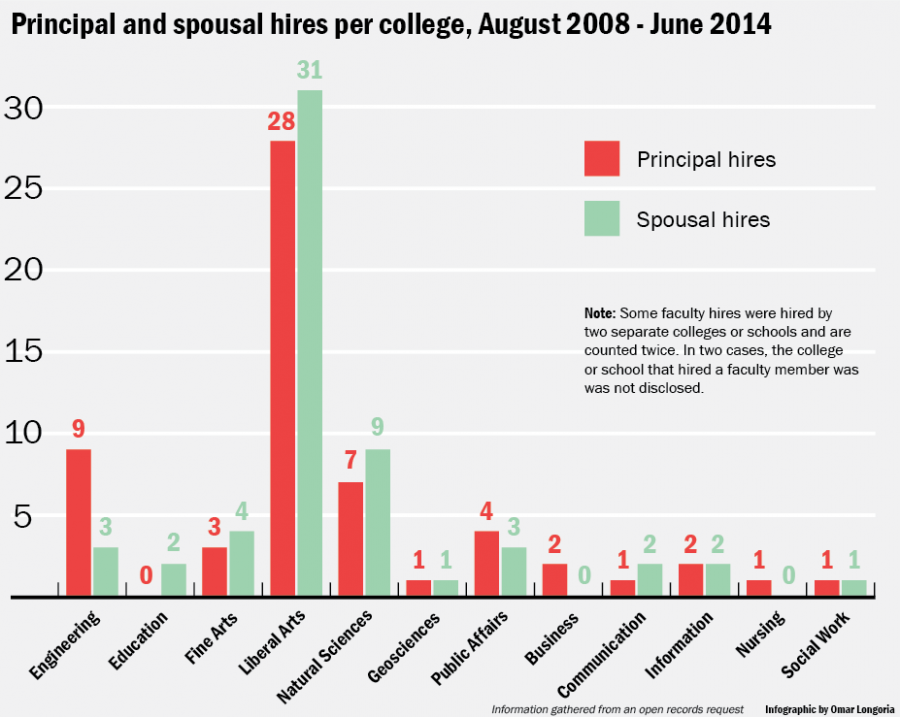 For couples in academia, finding a job is often a familial balancing act.

As a result, universities can negotiate faculty or staff positions for partners of existing or recruited faculty members as a means of being competitive among peer schools.

A document obtained by The Daily Texan shows that from August 2008 to June 2014, the University hired 58 dual-career couples.

While dual hiring is an important aspect of recruiting faculty, Janet Dukerich, senior vice provost for faculty affairs and management professor, said hires are only successful if the second partner meets the needs of the department in which he or she is seeking employment.

“We’re not going to hire somebody who’s not going to meet the requirements of what we would want for the initial hire,” Dukerich said. “These have to be opportunities, and, oftentimes, they are.”

Dukerich said each department handles individual hires differently, but, in couple hiring situations, both the initial hire’s department and the department of the secondary hire contribute funds to accommodate the second partner. When each partner is being hired into a different department or college, the Office of the Executive Vice President and Provost is often financially involved as well.

Couple hiring policies are applied to gay and lesbian couples. The University does not require couples to be legally married in order to benefit from a spousal hire, according to Dukerich.

UT spokesman Gary Susswein said the University does not have a specific budget allocated for dual hires, but they identify resources as needed.

“We get some of our best faculty, some of our best teachers and researchers, through these partner hires,” Ochsner said. “We see it as a plus when we bring in a faculty member we’re seeking and they bring in a partner who further enhances our college and our ability to teach and do research.”

According to a Stanford University report, 36 percent of full-time academics with employed partners have a spouse who is also a professor.

One such case is Andrea Gore, pharmacy and psychology professor. She left her faculty position at Mount Sinai School of Medicine to join her husband, a professor in the College of Natural Sciences. Gore and her husband commuted between Austin and New York City for five years before she secured a position in the College of Pharmacy through the couple hiring system.

“There are always personal issues when you have a dual-academic couple kind of relationship,” Gore said. “I think there is an automatic inferiority complex that comes along with being the spouse — even if you are incredibly competent.”

Gore said these feelings of inadequacy are more commonly dealt with by women whose partners are the initial hire.

“It really is a women’s career issue,” Gore said. “I think things will change when it becomes more and more common and when it happens that the woman is the initial hire and the man is secondary. That will help dignify the position a little bit more.”

From an employer’s perspective, Gore said it’s important to seek input from other faculty when it comes to hiring partners.

“If [faculty] are left out, that will also engender that sense of inequality of the spouse, even if it’s not intended,” Gore said. “If there’s an enthusiastic embracing of the person, then that goes a very long way toward doing away with that insecurity that you might otherwise have when you come to a new position as a spouse.”

According to Gore, partners of existing or recruited faculty also tend to be doubtful of the conditions under which they were hired and the fairness of the deal because of the informal nature of the dual-hiring process.

“Having at least some general guidelines would be helpful both to the department who’s hiring people as well as to the people who are being hired, as far as making it feel fair,” Gore said.

David Bell, former dean of faculty for the arts and sciences school at Johns Hopkins University, said there are certain inequities in the way couple hires are typically handled. Bell wrote an editorial in The Chronicle of Higher Education in 2010 that addressed a lack of formal policies regarding spousal hiring. It is not unusual for universities to grant more leeway in terms of couple hiring to the more experienced and prestigious faculty they recruit, according to Bell, who is now a history professor at Princeton University.

“There’s a free market in labor, and, the reality is, certain people will command more perceived value in the academic labor market than others, and often one of the conditions they will lay down, if they’re going to take a job, is for their spouse to be hired,” Bell said.

Younger professors, who are more likely to have young children, tend to gain less from the dual-hire system than more established professors do, Bell said.

“Superstar faculty are going to often have children who are raised. They are wealthier; they are more easily able to handle a long-distance commute,” Bell said. “I think universities need to be cognizant of this and try to avoid simply bending over backwards for the superstars and telling everybody else, ‘too bad.’”

Bell said universities should also be wary of policies, even if informal, that are too accommodating or give the impression that a faculty’s partner has a right to a position. Despite its trade-offs, Bell said universities typically view dual-career hiring as an advantage for both the faculty and the departments into which they’re hired.