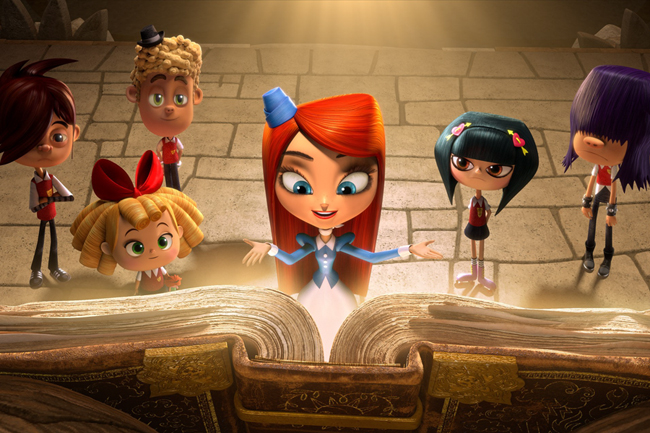 Inspired by Mexico’s Day of the Dead holiday and traditional Mexican folk art, “The Book of Life” is a visual feast as well as a jaunty ride. Mexican filmmaker Guillermo del Toro has crafted a distinctive look and an endearing story sure to capture the imagination of parents and children alike. While the film’s plot is less lively than the dead skeletons prancing through it, the colorful and vivid animation infused with a Latin flair breathes life into the otherwise uninspired film.

Reflecting its Latino influences, the film is filled with Mariachi versions of popular songs, such as Radiohead’s “Creep,” Rod Stewart’s “Do Ya Think I’m Sexy” and Mumford & Sons’ “I Will Wait.” The characters’ appearances are inspired by the marionette puppets often created for Día de los Muertos, or Day of the Dead, celebrations.

“The Book of Life” is a film within a film. Bookending the main narrative throughout the movie are scenes of a cheery tour guide (Christina Applegate) narrating the film’s story to a group of rowdy schoolchildren on a field trip, providing comic relief and placing the Mexican traditions that inspire the film in a contemporary context for young audiences.

Unhappy with ruling the miserable Land of the Forgotten, God Xibalba (Ron Perlman) makes a wager with his lover, La Muerte (Kate del Castillo), in hopes of manipulating her into exchanging her throne in the Land of the Remembered for his own desolate kingdom. Observing a love triangle that has formed between three friends — Manolo (Diego Luna), Maria (Zoe Saldana), and Joaquin (Channing Tatum) — both deities chooses a champion, and whoever wins Maria’s hand in marriage will determine the fate of the underworld.

Indulging clichéd fantasy tropes, the narrative propels an underdeveloped, overly familiar story of a sentimental and misunderstood underdog winning the affection of his true love after undergoing a quest of self-realization. The story is complicated by the almost purposeless introduction of the down-to-earth deity Candlemaker (Ice Cube) and Chakal and his band of ruthless outlaws who are intent on overrunning and pillaging the fictional town of San Angel. Rather than becoming the epic del Toro had wanted it to, the film became a convoluted wasteland of undeveloped characters, abandoned plot lines and half-explored worlds.

The story is underdeveloped and disorganized, but the film does impart important lessons. “The Book of Life” champions honoring the dead, advocates challenging societal roles and encourages individuals to construct their lives around their desires rather than the desires of others. The free-spirited Maria fights the traditional gender roles of women. Manolo struggles to tell his father he does not want to go in to the family business of bullfighting. And Joaquin grapples with admitting he cannot fulfill the role of legendary soldier society has forced on him.

While the film’s plot is guided by predictable conventions and convoluted by an overabundance of characters and stories, the heartfelt themes it champions and the detailed animation makes “The Book of Life” worth the cost of admission.