300: Reaching outside the box 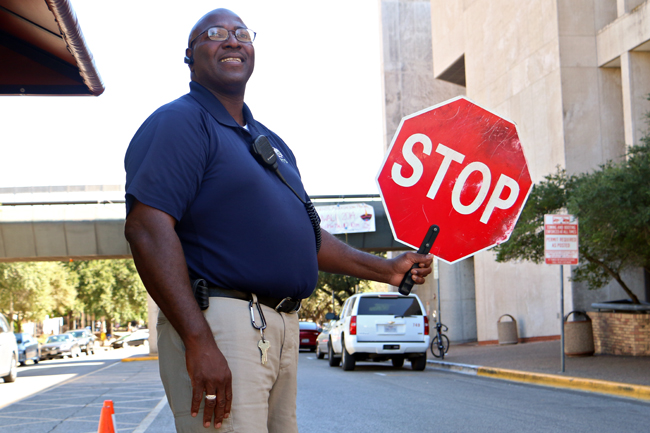 Michael Shaw spends five days a week in a box. He arrives at the 100 W. 21st St. kiosk at 7:30 a.m. Monday through Friday, sets up his equipment and waits for the cars and students to roll in. But Shaw, a parking enforcement attendant, loves his job.

He’s the first person many visitors and students see each day. The guy who yells “hook ’em” to students crossing the street; the guy who encourages people to smile and stay motivated; the guy whose coworkers call him “hyperactive.”

“I don’t have a medium level,” Shaw said.

He gets complaints from the occasional angry driver or passerby but endures the day with a smile on his face.

Maybe it’s because he is eager to spread the encouragement he received when he was once in a tough place.

In 2001, Shaw lost his job and $197,000. He tore his knee after working 13 years as a police officer and couldn’t pass the physical to continue in that line of work. Then, the stock market crashed.

His wife and four kids all had to adjust. Shaw stopped using credit cards. Jobs turned him away for being overqualified. He was without work for a year and a half. He went from a salary of $44 an hour to $8, working in security at various places in Austin.

Three years ago, he got a job with UT and has enjoyed working here ever since. Just as family and friends reached out to him during that difficult time, he reaches out to coworkers and students in need of advice.

He doesn’t ask for much in return.