Cigarroa reflects on time as chancellor in SG meeting address 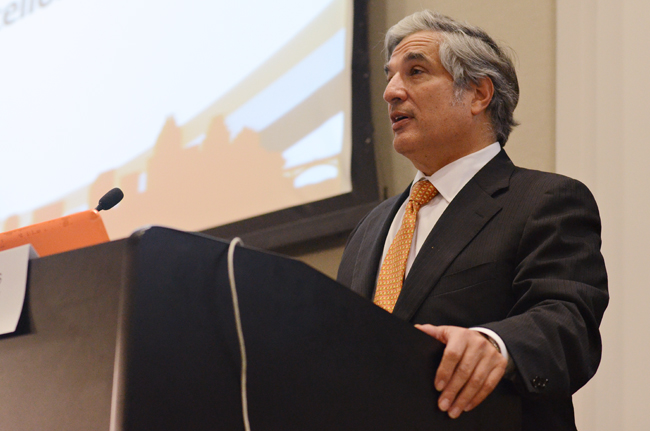 Francisco Cigarroa, outgoing UT System chancellor, addressed Student Government at its meeting Tuesday and said he had fulfilled his goals in his more-than five years as chancellor.

Cigarroa, who will leave his role in January to return to practicing medicine, said he approached his role as chancellor using skills he learned as head of pediatric surgery at UT Health Science Center-San Antonio.

“In order to excel in any administrative position you need to set priorities,” Cigarroa said. “And that was exceedingly important in the role of chancellor because the System is so large.”

When he became chancellor in 2009, Cigarroa said he met with the 15 presidents of the System’s institutions and decided to work toward making UT the finest public university in America, improving the health of Texas, establishing a larger System campus in South Texas and making System institutions leaders in the field of engineering and energy.

Cigarroa said he achieved all of this during his time as chancellor. He especially noted the importance of the Dell Medical School and improvements to the engineering programs in achieving his priorities.

“A school of medicine is such an unbelievable engine for innovations that integrates itself across all fields and disciplines in a great university like UT-Austin,” Cigarroa said.

In 2013, the state combined UT-Brownsville and UT-Pan American into a single institution, now known as UT-Rio Grande Valley, which will open fall 2015. Cigarroa said additional plans for a medical school for that campus will help to improve the area and contribute positively to research and the reputation of the System.

“It’s going to change the landscape and the human impact of South Texas forever,” Cigarroa said.

Cigarroa said the engineering program will further improve its environmental efforts as it continues to examine the field in West Texas.

“We really looked at how we are stewarding from West Texas land. … We’re in the process of appointing a world-class director who really knows how to run oil and gas,” Cigarroa said.

These efforts and others combined showed Cigarroa that he had fulfilled his goals at the University and was ready to step down come Jan. 4.

“I think the combination of the Dell [Medical School], our investments in engineering and the additional STARS funding will position the University of Texas at Austin as America’s finest public university,” Cigarroa said.

Cigarroa did not address UT-Austin President William Powers Jr.’s resignation in his speech. Cigarroa received backlash from many students, including SG leaders, when news broke in July that he asked Powers to resign. Powers and Cigarroa later agreed to set Powers’ resignation date for
June 2015.

The first legislation stated SG is in opposition of Secure Communities, a program run by Immigration and Customs Enforcement that sets guidelines for the detainment of immigrants for illegal offenses. The assembly sent the address to SG's Legislative Affairs Committee

“It was established to find violent, undocumented criminals, but it has overwhelmingly failed in its mission,” University-wide representative Taral Patel said.

The second resolution states SG stands behind the core values of Longhorn football head coach Charlie Strong and was sent to the Student Affairs Committee.

This story has been updated with information about the resolutions.