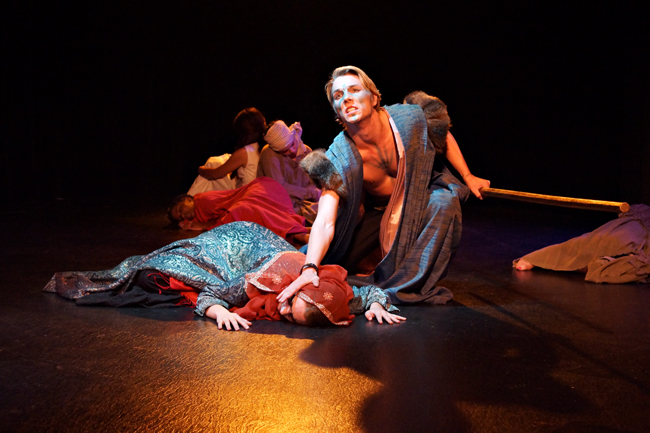 When choosing a play to direct for an undergraduate acting workshop, theatre and dance lecturer Pat Daniels saw Euripides’ 415 B.C. play “The Trojan Women” as the show most relevant to contemporary times.

Dealing with the aftermath of the fall of Troy, the Greek tragedy is about the fate of Trojan women who are captured by Greek soldiers. When selecting “The Trojan Women,” Daniels said the parallels in treatment of women in the play and in modern times influenced her decision.

“If you look at what’s happening to women in the Middle East right now, it’s the same area and the same type of thing is happening through war,” Daniels said. “I thought it was worth looking at because, in looking back, you can see a reflection of ourselves now.”

“The show is about women being oppressed,” Maranto said. “Even though it was written thousands of years ago, there are still issues today that are much like it.”

Although the play’s theme is familiar to the actors, it was the first time performing a Greek tragedy for many of them. For acting sophomore Julia Bauer, who plays captured Trojan queen Hecuba, the introduction to Greek tragedy was a way to broaden her acting range.

“It’s a whole genre that I’ve never gotten to step into before,” Bauer said. “The Greek tragedy is all new to me, so to experience that now while I’m still learning is just really valuable.”

Both actresses said the style of the Greek play was something to which they had to adapt to.

Daniels said the rehearsal process, which has been going on for the past six weeks, has been smooth and enjoyable because of the actors.

“The group of actors that I have, have worked incredibly hard, been very dedicated students, very talented students,” Daniels said. “They’ve really come together as an ensemble, and I think there’s a lot of passion about doing the show.”

Daniels and the cast hope their audience will empathize with and be able to put in a modern context the play’s themes of women’s demoralization.

“The reason they did Greek theater was to hold a mirror up to society and have them look at moral questions,” Daniels said. “So, when you go look at that, you should go through a cathartic experience. I thought it was worth doing that — not only for the people who perform it, but also for the audience.”