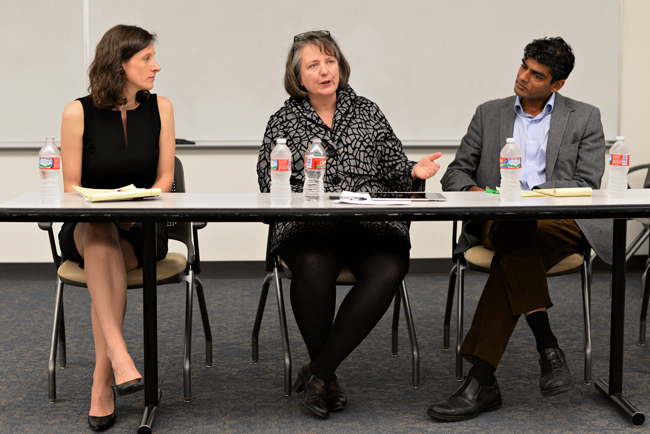 Kathleen Merrigan, Former USDA Agriculture Deputy Secretary, said at a lecture on campus Wednesday that the Supplemental Nutrition Assistance Program was one of the most successful products of the U.S. Department of Agriculture under the Obama administration.

During the lecture, hosted by the LBJ School of Public Affairs, Merrigan — who worked for the USDA from 2009 to 2013 as the deputy secretary and the chief operating officer — said the Obama administration has done an “above-average” job to avoid improper payments.

The SNAP program, formerly known as food stamps, serves approximately 47 million people in the United States, according to the Washington Post. Merrigan said the federal government aims to have less than a 4 percent error rate when avoiding improper payments. She said the SNAP program currently has an error rate of 3.8 percent.

Although Merrigan praised the way the USDA executed the SNAP program, she listed what she believed to be failures by the department. Among these was ensuring that there was an adequate amount of competition in the agricultural market.

Rajeev Patel, who is a research professor at the LBJ School of Public Affairs, also spoke at the lecture. He said he believes it is important to remember the circumstances in which the Obama administration was formed in context to the country’s approach to food topics. He said the department’s relationship with the private sector is something that should be taken into account when discussing the administration’s approach.

Public affairs graduate student Cristian Villalobos, who attended the lecture, said he believes the USDA should focus on educating parents on proper nutrition for children in the first 1,000 days of life. According to Villalobos, SNAP has been one of the more crucial programs since the recession in 2009.

“On a public perception level, it seems to have less of a stigma than other forms of welfare,” Villalobos said. “SNAP seems to be less politicized and conflated as a burden to the government.”

Merrigan said she believes there was an effort underway nationally to vilify the traditional SNAP beneficiary, driven by Republican budget cutting purposes.

“We were really trying to protect the image of the SNAP recipient and to maintain their dignity,” Merrigan said. “There was a notion that poor people can’t take care of themselves, and we tried to push back.”