Homeless population still an issue for Guadalupe Street 30 years ago 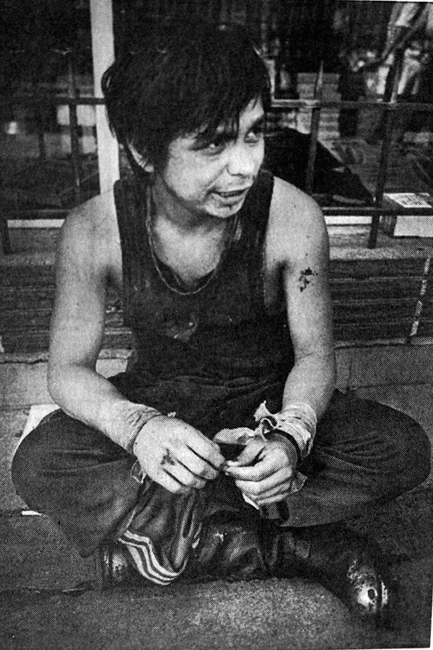 The homeless population on Guadalupe Street is a static characteristic of West Campus. They can be seen at all times of day walking up and down the Drag and have almost become a part of the University’s character. According to a 1986 Texan article, “Transients a Drag for Merchants,” homeless locals have been on that stretch of land for quite some time.

The article, written by Gina Sopuch and David Eldridge, centers around the Council’s issue in putting in place a plan that will try to address the problem of homelessness in Austin. According to the article, the transient and homeless population that resided on the Drag was raising problems for West Campus merchants in the area.

“University-area merchants say they are furious with the Austin City Council for dragging its feet on a plan to get transients off the streets and into the workforce,” Sopuch and Eldridge wrote. “The Guadalupe Street merchants say the transients are ruining their business and destroying their property by spitting and urinating on the storefronts and breaking windows.”

At the time, there were about 1,300 homeless people living in the city. According to today’s Homeless Management Information Systems, there are about 2,300 on any given night on the streets, but that number could be as high as 5,800.

Although the 1986 article and some of today’s discussions run in circles about how to address the Austin homeless population, Mayor Lee Leffingwell took a new pledge last week to end veteran homelessness by 2015. According to the Ending Community Homelessness Coalition, the number of homeless veterans has already gone down by 66 percent since 2011.

According to then City Manager Jorge Carrasco, Austin was under financial strains at the time and could not get funding for the project, which would open up more city facilities for homeless residents. D.M. Sheftall, owner of a jewelry shop on the Drag at the time, said the city often ignored the University area.

“The [City Council members] don’t really care that much about the University area,” Sheftall said in the article. “It’s just an ignored part of town.”

Sopuch and Eldridge went on to interview two transients who lived on the Drag, both of whom said they would not be interested in what the city had to offer them if the plan were to go through. Santos Luna, who, according to the article, had spent most of his life on the streets, said he would take advantage of some city facilities, but not on a permanent basis.

The article ends with a quote from an Austin Police detective, Sgt. Tom Schafer, who said the real victims of this situation, were the residents and merchants of Austin.

The article ends on a note which indicates that even if the plan were to pass, no one, not even representatives of the city or the transients themselves, thought it would do any good. This attitude still seems to linger in talks about how to address the problem of homelessness today.

The homeless population near the University has been a visible issue for over 30 years and is not easy to fix, but, no matter what year it is, there always seems to be people trying to help.