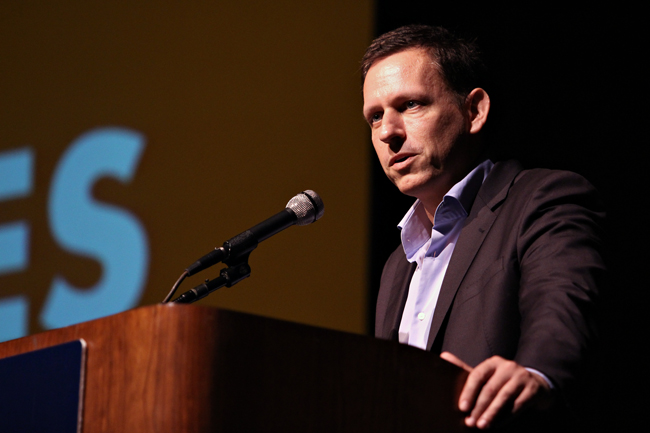 Peter Thiel, PayPal cofounder and early Facebook investor, spoke at the LBJ Auditorium on Wednesday about innovation, entrepreneurship and his new book, “Zero to One.”

At the discussion, hosted by executive vice president and provost Gregory Fenves and sponsored by the Innovation Center at the Cockrell School of Engineering, Thiel said innovation comes with originality.

“Every moment in the history of business [and technology] only happens once,” Thiel said. “The next Mark Zuckerberg will not be starting a social networking site. The next Bill Gates will not be starting an operating system company. If you are copying these people, there’s some sense that you are not learning from them. Science always starts with a number two.”

Thiel said society tends to underestimate new innovators and label people who do not succeed as “lackadaisical” or “unimportant.”

According to Thiel, a common perspective is that all possibilities have already been explored or discovered.

“We figure, everything has already been thought of by someone else … or it’s impossibly hard, [and] it’s a mystery,” Thiel said.

In order to continue innovation and entrepreneurship, Thiel said society needs to continue researching topics that are incomplete, rather than science and technology.

“[I think] in our time, science and technology is in some sense the real counterculture in our society,” Thiel said. “The idea that we could be doing a lot more is very much at odds. We wouldn’t even try at this point, I think, to declare a war on Alzheimer’s even though one out of three people at the age of 85 suffers from dementia. There is a subtle language … where if you haven’t succeeded, your expectation about what you can do gets commensurately reduced.”

“When you talk about innovation, you think right away about computers or software, but people must understand that technology is all over the place,” Gia said. “Having [Thiel], who has technology-based software, say that we should pay attention to this other kind of innovation that is holding back … really called my attention and makes me to say that people are thinking about it, and we should study and write more about it.”