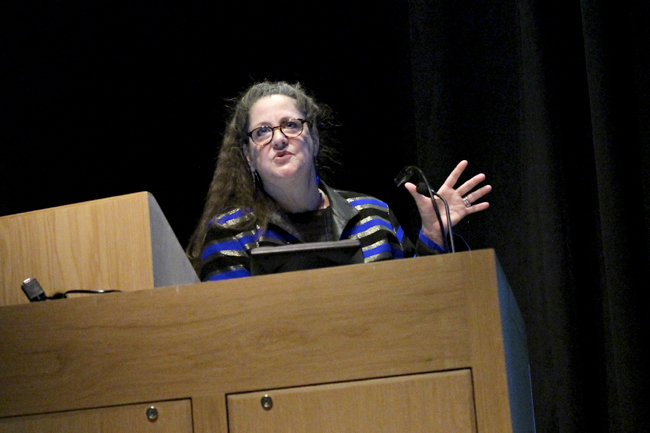 “Quite Dell,” deals with the true horrific tragedy about a serial murder committed in Phillips’ hometown of West Virginia in the year of 1931.

The historic event is about a widowed mother, Asta Eicher, becoming infatuated with a man named Harry Powers, who turns out to be a serial killer, eventually murdering Eicher and her three children. According to Phillips, the novel focuses more on one of Eicher's daughters, Annabel.

“I invented the personalities, perceptions, relationships even of these real characters,” Phillips said.

Phillips said her mother would tell her stories about the history of the murders.

“I was drawn to this material because I’ve known about it all my life,” Phillips said. “But it was really this picture here [of Annabel] that really influenced me.”

This crime was one of the first crimes of the Great Depression, according to Phillips, and functioned as a warning and a lesson to women at the time. This caused another lead character, journalist Emily Thornhill, to become involved in the case.

“It was spun as a warning and lesson to women which irritates Emily Thornhill really much, and irritated me,” Phillips said.

Phillips said that while writing her book, it was interesting working with the evidence and gathering research over the years for the making of the novel.

“I like to work with something. I need a shred of something real. I needed to go from the beginning to the end and even beyond the end,” Phillips said.

History junior Marlene Renz said she has not read the book yet, but she is very interested to do so after hearing hearing from Phillips about how the research went.

“I thought it was so interesting how she gave the different perspectives and point of views in the book, and I really like how she tied in the research,” Renz said.

While working with the case, Phillips got the chance to go to the house that the family once lived in and visit their graves. She noticed that the graves were unmarked and that bothered her because the tombs marked the end of a family.

“I said to myself ‘If I finish this book, I am going to make sure there are foot stones here at these graves,’” Phillips said.

Phillips said the tombstones of the graves will be uncovered on Nov. 8.