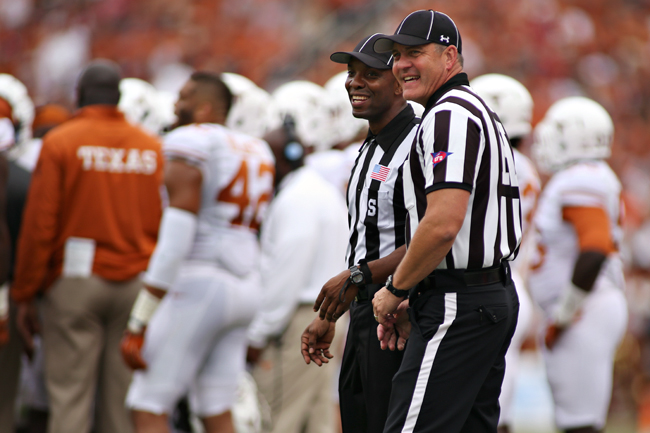 To say the officials were a bit flag-happy in Morgantown, West Virginia, on Saturday would be an understatement. In West Virginia’s 41-27 win over Baylor, the officials penalized both teams a total of 32 times — a Big 12 record — but it was a review at the end of the first half that caught a lot of ire from fans watching the game. With the ball at the West Virginia 39-yard line, Mountaineer senior quarterback Clint Trickett completed a pass into Baylor territory, but it was called back for ineligible man downfield. But, despite a supposed inability to review that variety of penalty, the replay official called for one and ended up reversing the call, putting West Virginia in position to hit a field goal before half. Monday, Walt Anderson, director of officials for the Big 12, said the replay official was, in fact, “correct” in calling for the review, ESPN’s Jake Trotter said. Anderson said the referees can review when the error is “egregious.” The Big 12 has had multiple officiating issues this year, so it’ll be worth watching to see what kind of can of worms this may open.

Oklahoma State might be without one of its receivers and a backup cornerback when it takes the field Saturday against West Virginia. Sophomore receiver Jhajuan Seales and freshman receiver Juwan Offray were arrested Sunday on complaints of public intoxication. The two were allegedly found asleep in a car in the drive-through lane of a Whataburger, according to a police report attained by the Tulsa World. Offray was also cited for hampering an officer when he reportedly gave the officer a fake name before admitting his actual name. Seales has caught 13 passes for 236 yards and three touchdowns for the Cowboys this season, and Offray has recorded three tackles.

The injury list for the Red Raiders is a lot longer than they hoped it would have been going into a big game against TCU on Saturday. According to the Lubbock Avalanche-Journal, Texas Tech has about a dozen players on the injury list, including eight on a defense that has struggled even when it was healthy this season. The biggest injuries are to sophomore safety Keenon Ward, who suffered a concussion in the win against Kansas, and senior linebacker Sam Eguavoen, who left the game with a lower left leg injury. Ward has 46 total tackles and a forced fumble this season, and Eguavoen has 49 tackles, a forced fumble and a fumble recovery this year.

TCU junior receiver Josh Doctson nearly beat Oklahoma State all by himself. In the span of three offensive plays, Doctson caught touchdown passes of 77 and 84 yards to put the Horned Frogs up 21-3 in the first quarter en route to a 42-9 win. For his effort, he was named Big 12 Offensive Player of the Week. Doctson finished the day with seven catches for 225 yards and those two touchdowns.

West Virginia came up with one of the biggest upsets in the conference this season when it held the Bears to only 27 points, their lowest point total this season, and a big reason was senior defensive lineman Shaquille Riddick, who was named Big 12 Defensive Player of the Week. Riddick totaled four solo tackles and three sacks in the win.

Texas junior kicker Nick Rose rounded out the awards, earning the Big 12 Special Teams Player of the Week award after kicking a 21-yard field goal to lift the Longhorns over Iowa State. It was Texas’ first game-winning field goal since Justin Tucker’s kick to beat Texas A&M in 2011.