Keys to the Game: Kansas State 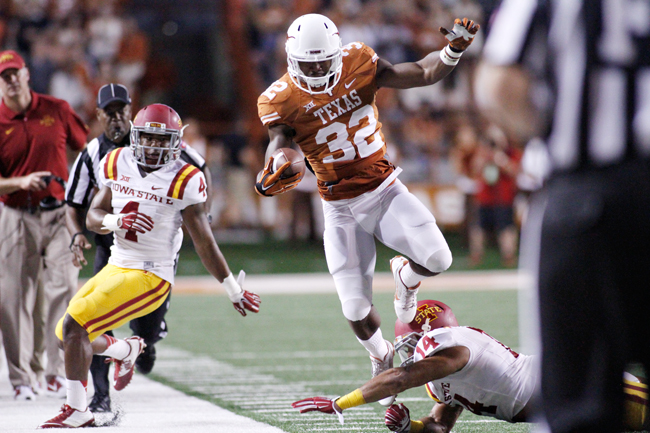 The Texas three-man linebacking corps will have to play disciplined football and win its one-on-one matchups in order to contain Kansas State’s diverse collection of offensive threats and stop an attack that is eerily similar to the one that helped BYU romp to a 41-7 victory over the Longhorns back in September.

The linebackers have to make an effort to neutralize senior quarterback Jake Waters’ run threat and still find a way to pressure the strong passer into making bad decisions. That being said, Waters will let his running backs — sophomore Charles Jones and senior DeMarcus Robinson — take over the game if the front seven is too focused on the quarterback.

Wildcat sophomore fullback Glenn Gronkowski will spend most of his afternoon lead blocking in the run game but, as Oklahoma quickly learned, he can tear up a defense if the linebackers do not account for him on short passes and play action.

Get the Backs Going

Junior Johnathan Gray and senior Malcolm Brown have been reliable but unremarkable in the season’s early weeks. Back then, it was assumed that defenses were throwing all of their resources into stopping the run with the hopes of forcing a young and unproven Tyrone Swoopes into making more throws than he was comfortable with.

The sophomore quarterback has looked as good as advertised the last two weeks, but the running backs still have not lived up to expectations. Brown did score two touchdowns against Iowa State, but his 3.8 yards per carry were a better indicator of his overall performance. The Longhorn staff says Gray is fully recovered from last season’s ruptured Achilles, but the junior does not look as explosive as he did in 2013.

Swoopes is improving, but Kansas State is a top-15 team that held the mighty Auburn offense to just 20 points. It would not be unreasonable to assume that Swoopes regresses against the Wildcats, and if he does, the backs will have to pick up the slack and put their recent struggles
behind them.

Defensive coordinator Vance Bedford loves to trot out five guys to bolster his secondary, but some of his defensive backs are so weak in man coverage that it may not be worth the change in personnel.

Texas’ nickel package means that Kansas State’s senior receivers — Tyler Lockett and Curry Sexton — will get the chance to line up opposite either sophomore Dylan Haines or senior Mykkele Thompson when one of the two slides from safety to cornerback in the nickel package. Opposing quarterbacks love to pick on Haines and Thompson in man coverage, and neither has given them a reason not to.

Senior defensive back Quandre Diggs could help neutralize one of the best receivers in the country in Lockett, but Bedford prefers to line Diggs up at nickelback to help stop the run. Haines and Thompson will have to put the Iowa State game behind them and play lockdown defense if Texas is to avoid another secondary meltdown against one of the best receiving corps in the country.