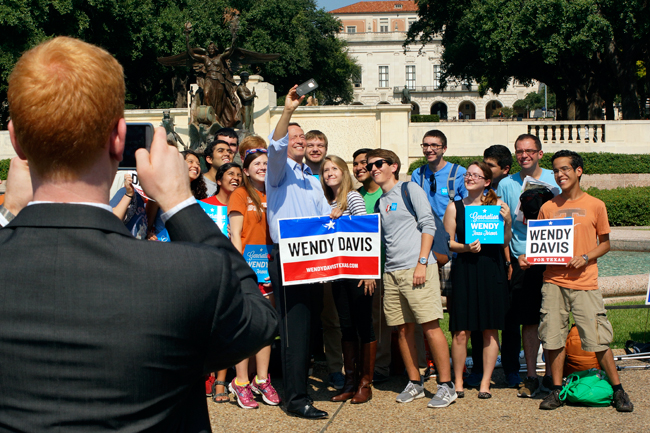 Maryland Gov. Martin O’Malley spoke to University Democrats on Thursday afternoon in front of Littlefield Fountain before the group block walked through West Campus in support of State Sen. Wendy Davis, D-Fort Worth.

Speaking to the group, O’Malley talked about the importance of student participation in the election and why Davis is his favored pick in the Texas gubernatorial race.

O’Malley, who has previously served as Baltimore mayor and is considering running for president in 2016, said he appreciated the group’s efforts to bring students together through the block walk, where club members walked through the neighborhood to talk with residents about voting.

“In my first race, I ran for state senate at the age of 27,” O’Malley said. “I lost by 22 votes. As you’re knocking on doors and flushing people to do early vote, know that sometimes these things are as close at 22 votes. Every person makes a difference.”

According to O’Malley, students should favor Davis because of her views on college tuition and future economic development.

“In this choice for governor, you have a woman who believes that making college more affordable for the greatest number of people is good for our economy, and then you have the other fellow that wants to treat it like a toll road,” O’Malley said. “I think that one issue demonstrates a difference in philosophy. Wendy believes we’re in this all together, [and that] we need each other, and that the better educated our people, the more successful our economy.”

“I really do think that on Election Day, Texans are going to turn out to the polls in numbers that we haven’t seen before, and when a Democrat does get elected governor in the state, it’s going to be because of non-likely voters [and] voters who didn’t vote in 2010,” Adams said. “Polls don’t necessarily reflect what we’ve been seeing on the ground.”

Max Patterson, University Democrats president and history senior, said early voting — which continues through Oct. 31 — is the most convenient way to vote.

“Early voting is one of the easiest things you can do,” Patterson said. “There’s no lines and you can go in the [Flawn Academic Center]. Voting is the easiest way in participating in our democracy — it’s raising your hand and saying that you have a voice, and that’s because your vote is your voice, and if you silence yourself then no one should care to listen to you. It’s all about getting out to vote.”