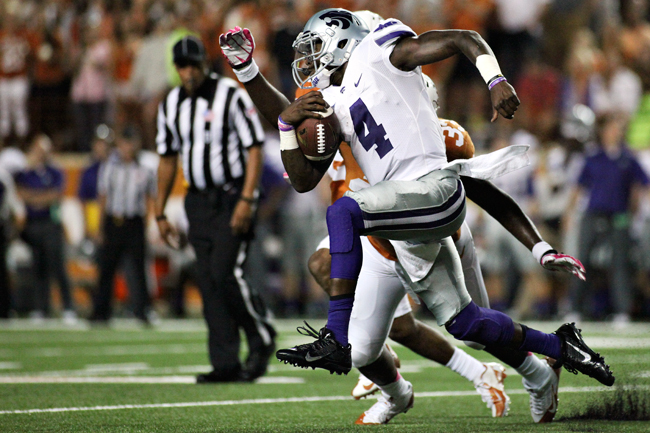 Waters is enjoying a breakout campaign in his second year as the starter, passing for 1,431 yards and nine touchdowns and just three interceptions through six games. He currently sports a career-high 65.1 completion percentage, and he’s topped 200 passing yards in every game in 2014. The biggest difference for Waters this year, however, has been his ability to run the ball. The senior leads the Wildcats with 371 rushing yards, already more than he had all of last year, and he’s scored seven times on the ground. He’s rushed for at least one touchdown in five of his six games this season, and he has four games with at least 50 rushing yards. The Texas defense had trouble slowing down Sam Richardson, Iowa State’s dual-threat quarterback, last week, and Waters figures to be an even tougher matchup.

At 5 feet 11 inches and 175 pounds, Lockett doesn’t fit the size of a prototypical number one receiver, but that’s exactly what he’s proven to be for the Wildcats. After catching 81 passes for 1,262 yards and 11 touchdowns last year, Lockett has seen a bit of a dip in his numbers this season. Nonetheless, he’s still been highly productive, hauling in 35 passes through six games while leading the Wildcats with 485 receiving yards and four touchdown grabs. Lockett dominated the Longhorns last year, recording a career-high 13 catches for 237 yards, and he could be in line for another big day against a struggling Texas secondary.

Through six games, Sexton has been one of the biggest surprises in the Big 12. After a promising junior season in 2013, the senior has exploded this season for 412 yards and two receiving touchdowns while leading the Wildcats with 36 receptions. He’s had three games with at least eight catches already, and he has two games this season with at least 120 receiving yards. He’s been particularly impressive in his last two outings, hauling in 17 receptions for 205 yards and two scores over that stretch. He and Lockett combine to form one of the best wide receiver duos in the conference.

Despite having zero carries under his belt entering the season, Jones has established himself as one of the Wildcats’ most explosive playmakers. The sophomore leads Kansas State with eight touchdowns this season, and his 336 rushing yards are second on the team behind Waters. He rushed for at least one touchdown in each of his first four games this season, and he has three games with at least two scores so far in 2014. He’s still looking for the first 100-yard performance of his career, but he’s been steadily averaging 4.9 yards per carry so far this year.