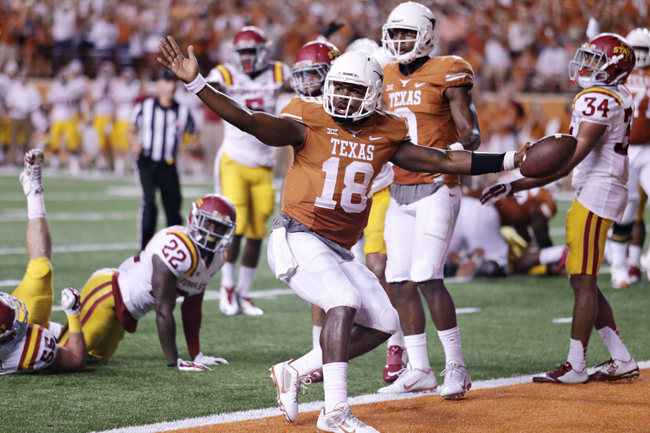 … If the defense can rebound from its rough outing against Iowa State. The Longhorns gave up 524 total yards against the Cyclones. If Texas is going to upset No. 11 Kansas State, the defense needs to play like it did against Baylor and Oklahoma, and head coach Charlie Strong knows that. At his weekly press conference, Strong said the mistakes made against Iowa State are fixable.

“It’s all about fundamentals and technique,” Strong said. “It’s about alignment. It’s all about gap integrity. [Iowa State] making the throws that should have never been made. Guys weren’t [in pass coverage] dropping in the right spots. That’s what upsets you cause it’s things we have done and played so well.”

If the defense plays up to its potential, Texas could pull out a win Saturday.

… If sophomore quarterback Tyrone Swoopes can continue to improve. Against Oklahoma and Iowa State, Swoopes threw for a combined 655 passing yards and three touchdowns. Additionally, Swoopes ran for 145 yards and two touchdowns. If Swoopes can perform up to the standard he set over the past two games, the Longhorns will be in prime position to beat the Wildcats.

… If it can’t contain senior wide receiver Tyler Lockett. Lockett is a huge threat in the Kansas State offense. This season, Lockett has amassed 485 receiving yards and four touchdowns. If the Longhorns can’t contain Lockett, it could be a long afternoon in Manhattan.

… If it can’t stop Kansas State’s rushing attack. The Wildcats have recorded a total of 1,105 rushing yards and 19 rushing touchdowns this season. Kansas State also averages 184.2 rushing yards per game. Texas will need to stop the Wildcat running game, or it will struggle Saturday.

… If it struggles against senior quarterback Jake Waters. Waters is the team’s leading rusher with 371 yards this season and has rushed for seven touchdowns. Waters has also thrown for 1,431 yards and nine touchdowns. If Waters plays well against the Longhorns, they don’t stand a chance.