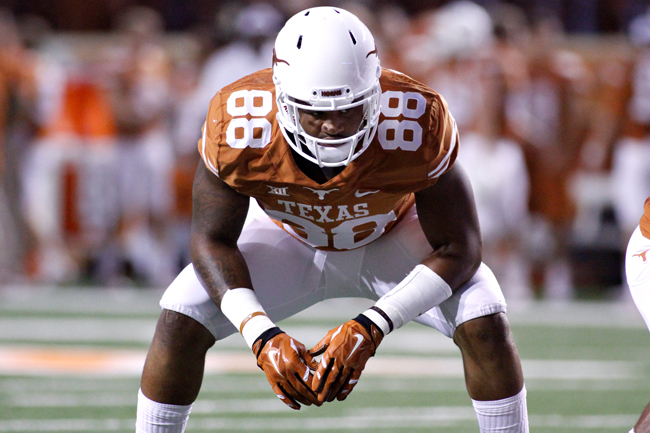 Safety Jason Hall may only be a freshman, but his presence was sorely missed against Iowa State. The patchwork rotation of sophomore Adrian Colbert and senior Josh Turner struggled against the Cyclones.

Hall is listed as day-to-day, so even if he does play against Kansas State, it’s unlikely that he’ll be at 100 percent. The Longhorns will need better production from Colbert and Turner if Hall is out or not at full strength. On the opposite side, senior safety Mykkele Thompson had issues against Iowa State, too.

The Longhorns will have a challenge in defending Tyler Lockett, Kansas State’s deep threat, so they can’t afford to have troubling safety play to plague an otherwise solid secondary. Colbert, Hall, Thompson and Turner must step up in order for Texas to upset the Wildcats.

Junior linebacker Dalton Santos started at middle linebacker in place of senior Steve Edmond against Iowa State. Dalton appeared a step slower than the Cyclones, and Edmond was forced into action as a result.

If Edmond isn’t 100 percent Saturday, Santos will need to be ready to go against the Wildcats. He’ll need to step up and perform better than he did against the Cyclones if he is forced into the middle linebacker role against Kansas State.

Senior defensive end Cedric Reed hasn’t had the season he was expected to have. While Reed’s presence on the field is noticeable, his season statistics show that his productivity hasn’t been great. This season, Reed only has 1.5 sacks and four tackles for loss. The Longhorns need more from Reed as they look to knock off the Wildcats on Saturday.

While the offensive line has hampered the Longhorn running game this season, senior running back Malcolm Brown, junior running back Johnathan Gray and sophomore quarterback Tyrone Swoopes have finally started to see success running the ball.

Swoopes ran for 95 yards and a touchdown against Iowa State. Brown and Gray added an additional 86 yards and three scores on the ground against the Cyclones.

Now that Swoopes is having success running the ball, defenses are more likely to respect him in the run game, which will open things up for the backs. If the Wildcats contain Swoopes, the running backs will need to step up in his place.