Student uses wheelchair for week to test accessibility on campus 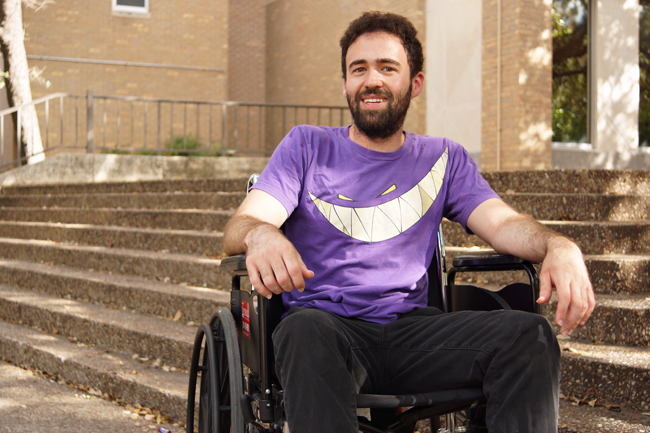 My hands were blistered, and my arms felt like they were about to fall off. I began to wonder what I’d gotten myself into. It was only the first day of my week in a wheelchair. I was trying to experience what a disabled student might endure when trying to navigate the UT campus. I felt like giving up a hundred times, but I knew I had to hang in there, so I pushed on through the pain. You might wonder why I would subject myself to this.  My intentions were twofold: to understand better what my handicapped classmates were dealing with on a day-to-day basis, and to see where the University might be able to improve on its accommodations for them.

I was nervous, to say the least, when I sat down in my rented wheelchair for the first time. Within a few minutes, I headed past Robert Lee Moore Hall on Dean Keeton to the intersection of 24th Street and Speedway. Sliding through the crosswalk, hoping the cars could see me, my hands started to throb and my back tightened as my mindset began to change very quickly. I stopped wondering about what would be the fastest way to get to my next class and started strategizing about the only way to get there. Which path had the fewest stairs, the easiest access to an elevator, even the smoothest sidewalk? Every obstacle seemed to be amplified, even the tiniest pothole on the pavement.

Other students rushed past me, oblivious to my hardship. I felt invisible and yet also awkwardly conspicuous. No one offered to help that first day. They all had their own struggles. Just grab the wheels and push, my mind seemed to say, and eventually I got to my biology lab, only 15 minutes late. I hurt from head to toe, and it was the first time I actually remember feeling relieved about getting to class.

Over the next few days, I spoke to several students here on campus about their own experiences.

“When I used the community bathrooms for the first time at my new dorm, Kinsolving, they didn’t have grab rails to hold onto,” said Shalom Hernandez, a business freshman who uses a wheelchair to get to most of her classes. “The bathrooms didn’t have anything to hold on to. There was a stool to sit on in the shower, but it was broken. So the first few days of being here were difficult, to say the least. I went directly to the [Services for Students with Disabilities] office, and they immediately moved me to a newer, more accommodating dormitory.”

Next, I spoke to a University alum, Max Ritzer. He broke both of his feet and a leg in a car accident. I asked Ritzer how he found his experience on campus after his injuries.

“I only needed to use the wheelchair for a couple of months,” Ritzer said. “I thought that I could have just powered through it and that there would be some kinds of services to help me get to class. It was hard, to nearly impossible. Stressful to the point where it would have adversely affected my academic performance and my mood, even taking a minimal load of classes.”

“I wanted to live in Carothers [dorm]; however, it was not wheelchair accessible after hours,” Ritzer said. “Each evening, someone would have had to have come down and let me in from the front desk. I tried to talk to some of the staff there, but they did not seem like they had encountered this type of situation before.”

Ritzer spoke to the Services for Students with Disabilities office on campus about getting some help. His impression of the SSD was surprising. “They seemed geared more towards the learning disability side of things and not so much mobility issues.”

After speaking with students like Ritzer and Hernandez, I ventured out to do some investigating myself. On a visit to Carothers, the employees at the front desk informed me that the building was still inaccessible after hours. They divulged another interesting bit of information: The Blanton dorm is completely inaccessible by wheelchair. Every way, in or out, is dominated by stairs. After learning about this, my next stop was the people responsible for making accommodations for students with a variety of disabilities, including mobility problems here at UT.

“Older buildings are allowed to be grandfathered in if it is not cost effective to make major changes to them,” said Emily Shryock, associate director of the SSD.  “If a student with a physical handicap is assigned to a classroom that is not accessible to them, the entire class is actually moved to a different room rather than telling the student they can’t take the class.” Shryock is a graduate student herself and also uses a wheelchair, so improving disability access here is a personal as well as professional passion for her. “Because it is an older campus, renovating buildings is a work in progress for the University, but we are working on it,” she related.

In my searching, I did find some things that, in my opinion, could be improved upon. The bulk of my time was spent in the University’s chemistry building, Welch Hall. I discovered that very few of the doors there were equipped with handicapped buttons. Not being able to fit through the door of the main auditorium in Welch or trying to use the bathroom in a stall that was too small to even close the door — those were a few of the more disturbing experiences I encountered. Most buildings, however, were outfitted with at least one ramp, self-opening exterior doors and elevators. There was only one building on campus that I found completely inaccessible to wheelchairs: Blanton.

One thing I learned from many of the students whom I interviewed, though, is that they are just students like everyone else. Their mobility issues are another challenge to overcome but, more importantly, they also hold jobs, make good grades, go out on dates and have just as much fun as any other student.

“We’re normal people,” said Mark Zupan, a wheelchair rugby player and captain of the United States wheelchair rugby team that competed in the Paralympic Games in 2004. “Don’t be scared because we are in a chair. People don’t understand that. They think, ‘Oh, a wheelchair, something’s wrong with their heads, something’s just not right.’ Well, yeah, we may be a little twisted, but no more than anyone else.”

As I became more comfortable with my new mode of transportation over the week, I found that many people did reach out to help me, often holding doors open or showing me the nearest wheelchair ramp. I discovered unique paths to my classes and even saw parts of the campus that were totally new to me. I did find, though, that more times than not, there was only one way in or out of a building. Luckily, I could usually negotiate it.

Just as my mind and body were finally getting used to a new life, my week in a wheelchair was over, but many of the lessons that I learned will be with me forever. Not only had my sore hands gotten tough and calloused, but my mind had toughened a bit as well. What started as a discussion with a friend about handicapped mobility on campus ended up being an experience that broadened my horizons and gave me a whole new respect for my classmates with disabilities.

Ridout is a French senior from Garland.