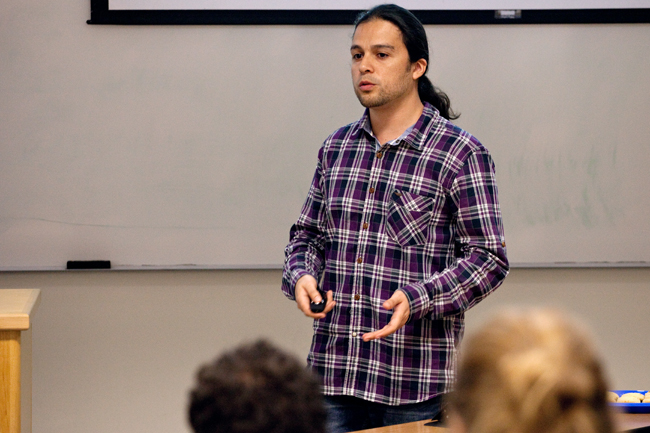 “In this kind of work, we try to collaborate with people from all sorts of fields,” said Barrientos, a researcher at Pontificia Universidad Católica de Chile.

According to Barrientos, two different theorems can be applied to statistical data. The Lorenz curve and the Gini method both use “predictors,” which are characteristics that can explain the probability of a future result. Predictors can include things in a population of data such as income level or educational level. The equations are types of “predictive analytics” that can be associated with mathematical equations he has developed.

“A lot of statistical inference we see is traditionally under-simplified,” mathematics professor Peter Mueller said. “Those paradigms are changing. We’re getting more and more data sets that require us to ask a lot more questions.”

Mueller said Barrientos’ methods can be applied to economical data. He said when an economist looks at wealth distribution in the U.S., the Lorenz curve and Gini method could be used to predict what will occur in the future.

According to Barrientos, his methods could also be applied to the medical field. He said his mathematical theorems applied to the Lorenz curve can be useful to processes such as blood sampling. Predictors in data such as blood characteristics can be helpful in identifying what types of signs to look for in predicting disease. The predictors can then be accumulated using the mathematical theorems.

Barrientos also talked about financial data and how banks use predictors and statistical data.

“They consider all of your characteristics and put it into a model,” Barrientos said.

He said banks acquire data from their clients such as age, income and marital status when applying for credit. They then use this information as predictors to determine if the individual is eligible for credit.

“He was telling us all the secrets that we don’t learn in introductory statistics,” Mueller said. “It’s not rocket science, but, like all sciences, it’s highly specialized.”