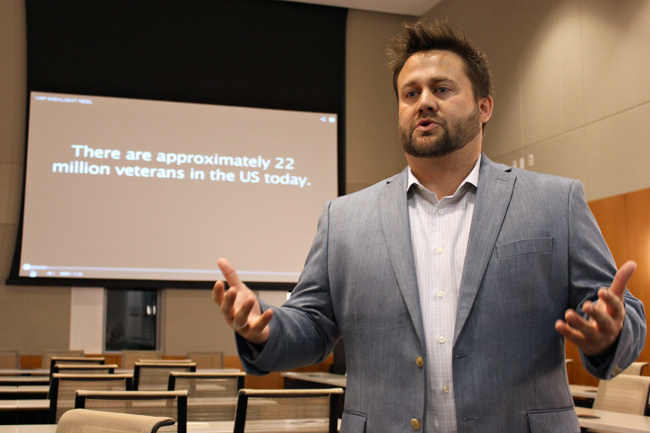 As part of the ongoing Austin Arts and Service Celebration, BR McDonald, founder of the Veteran Artist Program, moderated a discussion Friday at the SAC with Austin-based veteran artists Jenn Hassin and Jeff Moe.

McDonald served as an Arabic linguist and member of the special operations forces during the wars in Iraq and Afghanistan, but decided to pursue an acting and singing career after his deployment. He said many other veterans also want to have careers in the arts.

“The mission of [Veteran Artist Program] is to encourage and promote the veteran artists,” McDonald said. “We focus on disciplines of art such as visual arts, writing or literature, performing arts, filming or video and interactive media. For now, veterans consist of those who were artists before an enlisting or drafting, became artists while serving and those who return home and use it as healing and expression.”

McDonald started the Veteran Artist Program in Baltimore in 2009. More than 1,000 artists have come to associate with the group over the last five years.

Austin native Hassin served as an Air Force dental technician in England until 2009. She then enrolled at St. Edward’s University as a pre-dental student but switched her major to art. She now owns her own art studio after working for Austin-based production company Rooster Teeth post-graduation.

One of Hassin’s art piece, “Letters of Sacrifice,” will move from Austin to the Pentagon, where it will be on display for a year.

“When I started this project, I went to my commander first to ask what he would have written had I died,” Hassin said. “He explained that for this letter, the military has a template. So I took the letter and turned it into being about a man. From there, I took the template and did one for each of the 6,809 that have died since the start of the war.”

Moe served as an Arabic linguist and as part of the 82nd Airborne Division and U.S. Army Special Forces. He is now UT’s student veteran outreach coordinator after graduating from the University with a degree in social work and Middle Eastern studies.

“I have found music to be therapeutic,” Moe said. “During my time in Iraq, I found a guitar and it allowed my mind to focus on something different. The arts allow veterans to organize and be creative to express something in a different light.”