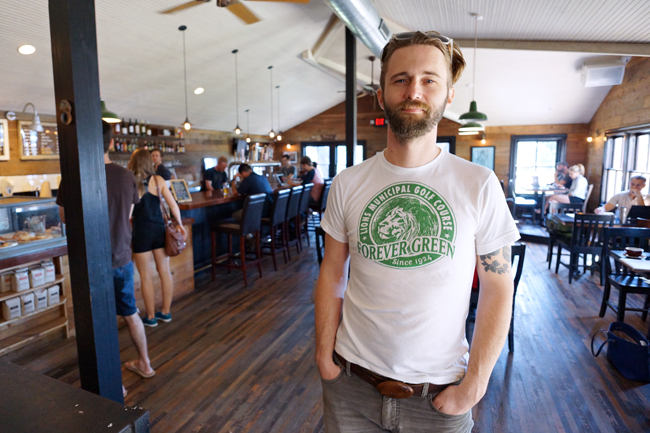 Standing outside Radio Coffee & Beer, Jack Wilson, UT alumnus and owner of the store, is busy bouncing a baby in his arms while chatting with a friend. Wilson is surrounded by people sitting on lawn chairs and picnic tables, drinking beer, eating tacos and typing away on laptops.

After graduating from UT, Wilson moved to Seattle with plans of becoming a teacher but ended up ingrained in the city’s coffee house scene. When he moved back to Austin, Wilson brought three years of experience working at Victrola Coffee Roasters with him, and that became a model for his next endeavor. Wilson began working with his father and now co-owner to develop ideas of opening up a coffee food trailer.

Their business plan changed because of the uncertain stability that comes with opening a food truck, so they settled on opening a brick-and-mortar coffeehouse instead. They also host the food truck Veracruz All Natural, which sells tacos made with homemade tortillas.

“It was really just a conglomeration of a lot of ideas that we had been tossing about,” Wilson said. “That process started about two years ago and what evolved in a year through millions of little decisions.”

Radio Coffee & Beer, which opened in June 2014 on the corner of Manchaca and Fort View roads, offers a wide range of options for customers. They sell coffee from Stumptown Coffee Roasters, offer brews from various breweries, such as 512 Brewing and Austin Beerworks, and the pastries come from local vendors, such as East Side Pies, Sugar Mama’s Bakeshop and Moonlight Bakery.

“It’s our beer garden, it’s our green house, it’s our cafe [and] it’s our pub,” Wilson said. “All these people that live in these apartments that never had any place to go now can walk to their corner pub, which they had never gotten to do before.”

According to Alexander Gustafson, regular Radio customer, the “cafe pub” helped fill a hole left by closures of coffee shops such as Ruta Maya
and Flipnotics.

“Because it is such a well-loved place, to work here is almost a privilege, and people feel like they want to take care of it like they would their own place because they love Jack, and they love all their friends that show up.” Gustafson said.

Jonathan Horstmann, Radio barista and bartender, said it is easy to be sucked into a “Radio hole.”

The property where Radio currently sits previously housed a vintage boutique store that was torn down to create a spacious, grassy patio area. The patio gives off a vibe similar to that of being in a friend’s backyard, and the building, which is a small house built with salvaged wood, makes the atmosphere feel cozy and welcoming.

“I hear the word ‘hipster’ a lot, which is hysterical to me because we have every kind of person here,” Wilson said. “We have suits in their 50s, and we have hippies in their teens; we have punks and jocks and gaming nerds and everyone, and I love it. That’s the way I want it to be.”