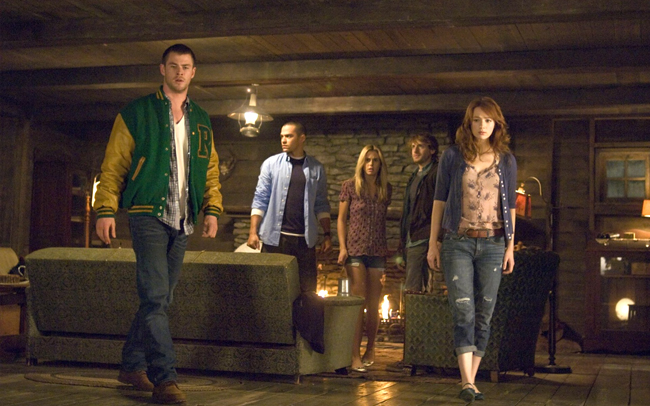 Halloween is upon us and with it comes a perfect excuse to indulge in the cinema of the disturbing, the horrifying and the campy. With hundreds of horror films to choose from, The Daily Texan has compiled a list of scary classics and contemporary horror films that we consider must-sees this Halloween season.

This is the film that began the horror genre’s obsession with devil worshippers. Absent of violence and gore and set in an antiquated New York apartment complex, the film is so realistic it is almost plausible until the Devil himself makes an appearance. The film was directed by Roman Polanski and its script and visuals are as strong as the psychological horror it causes.

“The Cabin in the Woods”

Acting as a homage to every horror movie trope ever conceived, “The Cabin in the Woods” scrutinizes and lampoons every cliché in the genre. After five teenagers take a vacation to an isolated shack, they soon find themselves stalked by brutal killers, which a mysterious entity seems to control. Bursting with creativity, the story leaves horror movie lovers reevaluating their favorite films in a new light. Great comedic timing, along with brilliant writing and directing, make this movie a great Halloween choice for those wanting a bloody — but clever — traditional scary story.

“ParaNorman” is a family-friendly zombie movie. The film stars Norman, a young boy who can see ghosts. After a centuries-old curse threatens to destroy his small town, he and his friends race to stop the undead and break the spell. The film features gorgeous stop-motion animation on par with classics such as “A Nightmare Before Christmas” and likeable characters who bring out the charm in a fun, creepy story. Its themes of acceptance and its fantastical imagery and design make it a kid movie that adults and even hard-core horror fanatics can enjoy.

“Let Me In” proves that vampire romance can be done without witless characters and stilted dialogue. A remake of a Swedish horror film, the story follows Owen, a young adolescent who is mercilessly bullied and ignored by his parents. He soon meets Abby, a secretive girl who may not be what she seems. While the story is a twisted romantic tale at its heart, it also features the grizzly action expected in any supernatural horror film. The two young leads perfectly convey the sweetness and horror of the grotesque relationship the two have developed. “Let Me In” puts more life into a sub-genre that is often mocked.

Although it’s not even a year old, “Oculus” has the makings of a new classic by presenting genuine supernatural terror. Following two siblings determined to destroy a possessed mirror that has wreaked havoc upon their family, the film follows two separate time lines: one from the duo’s youth, and another set in present day. “Oculus” delves into paranoia and the slow disintegration of a family trapped in the mirror’s grasp. With a story that plays with expectations and perceptions, the film is a terrifying revival of the “haunted object” horror movie that is sure to be enjoyed for many years.

The film’s subtitle, “Can a Full Grown Woman Truly Love a Midget?” deceivingly makes light of what is a truly horrifying movie. This pre-code Hollywood production features real carnival sideshow performers and physically deformed people in a nerve-racking, fast-paced and unsettling film with a campy quality. “Freaks” is a cult classic that may not be scream-worthy but depicts some disturbing and lasting images of mental and physical brutality.

“Santa Sangre,” Spanish for “Holy Blood,” is a 1989 surrealist horror film combing sly humor, psychological pain and resounding poetry. While it pays homage to classic horror films, such as “The Beast With Five Fingers,” the film does not celebrate evil with dramatic over-embellishment and fantasy. Rather, it chastises a society’s complacency with evil using subtle but potent images of depravity rooted in the everyday life, such as drug use, homelessness and child abuse. While it does contrast with the dramatic films of the horror cannon, “Santa Sangre” should not be overlooked.