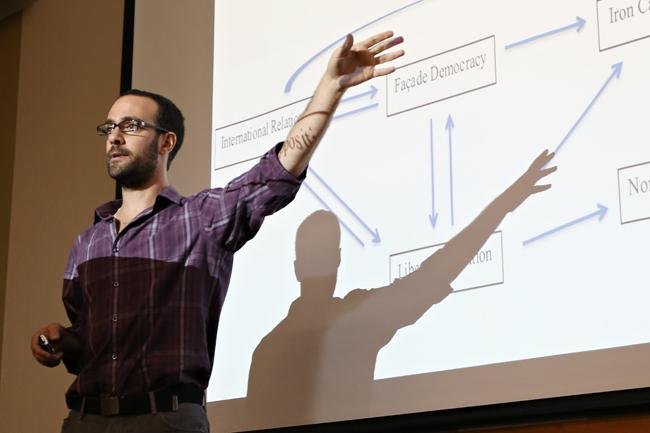 In a talk hosted by the Department of Sociology, a visiting politics and international relations assistant professor said revolutions were associated with violent actions for many centuries. But a shift occurred in the 1970s when nonviolence became the popular course of action.

In a lecture in the College of Liberal Arts Building on Monday, Daniel Ritter, a UT alumnus and University of Nottingham assistant professor, talked about changes in revolutions and previewed his upcoming book, “The Iron Cage of Liberalism: International Politics and Unarmed Revolutions in the Middle East and North Africa.”

Ritter addressed two theories of revolution: The first focused on domestic and international politics, and the second was nonviolent action, which focused on voluntarist actions and strategies.

“This relationship between dictators and democrats inadvertently traps both these authoritarian and democratic states by holding them accountable to the shared liberal discourse of democracy and human rights,” Ritter said.

Ritter said he shows in his book the positive side of the movements in Iran in 1979, Tunisia and Egypt. He said the countries where the movements failed were Libya, Syria, and Iran in 2009.

Ritter discussed the movement’s implication in Egypt. As Egypt began to shift from a socialist government to a capitalist system, President Hosni Mubarak used the term democracy as a catch phrase. According to Ritter, it was not until after September 11, 2001, when the U.S. became engaged in the Middle East, that the Egyptian government was forced to behave more democratically.

Sociology associate professor Mounira Charrad, who worked with Ritter when he was a doctorate student, attended the event.

“[Ritter] is my friend and former student,” Charrad said. “I had the privilege to serve as his advisor during his dissertation, which is a small piece of what is now a fascinating book. I am immensely proud of what he has accomplished. You make us proud, and you make me proud.”

Sociology graduate student Adrian Popan was intrigued by how Ritter pieced it all together.

“It is interesting how [Ritter] has taken these different variables of structure, cultural and individual variables to describe this situation,” Popan said.  “This can be liberating but also dogmatic and frightening.”