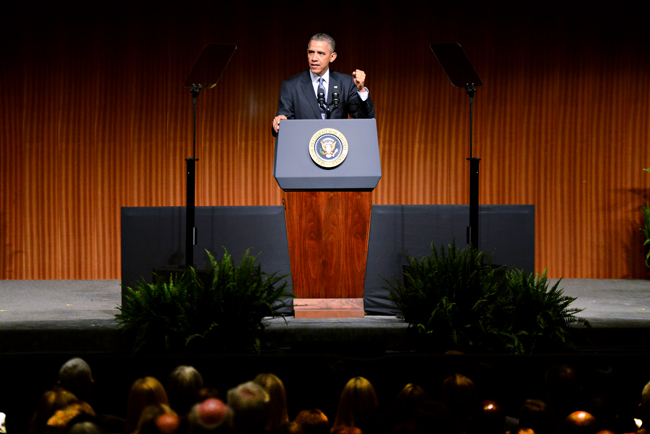 During this current election season, Republican candidates repeatedly have tied their Democratic opponents to President Barack Obama, in an effort to make political gain. Greg Abbott, the Republican nominee for Texas governor, has blanketed the state’s television airwaves with a commercial attacking his Democratic counterpart Wendy Davis and her proposals as “just like Obama.” Abbott’s ad even pictures a desk labeled “Governor Barack Obama, Texas.”  Similar advertisements are running in other states across the country, especially in more conservative states.

While Obama holds about a 42 percent approval rating, which is low and makes him fodder for campaign attacks, does this mean his presidency has been unsuccessful? Quite the contrary, I would argue. The Obama years have been among the most important in recent political history. Historians cannot fully evaluate a president’s record until years after he (or soon maybe she) leaves office, executive papers become available, and time provides context. Obama has more than two years left in office, and a lot — both good and bad — can happen. However, I believe that so far, this president has scored many remarkable achievements that will benefit his historical legacy.

The election of Obama as our nation’s first African-American president is immensely consequential in and of itself. Obama’s triumph speaks volumes about the United States’ quest to overcome the most troubling aspect of its history — the legacy of slavery, racism and segregation. It marks a proud and moving moment for the country. Obama also handily won re-election in 2012, putting him in that group of presidents elected to two terms.

Upon his inauguration in 2009, Obama inherited a myriad of dire situations at home and abroad. Few presidents had entered office under more bleak circumstances. The United States faced its most serious economic crisis since the Great Depression, as the nation’s financial institutions, housing market and automobile companies appeared on the brink of collapse. The unemployment rate soared above 10 percent in October 2009 and the stock market went into freefall. The Obama administration worked to secure the financial solvency of the country’s big banks, General Motors and Chrysler, and won passage in Congress of the American Recovery and Reinvestment Act. Although derided by conservatives as wasteful, the Recovery Act infused the economy with money in the form of government-sponsored work projects and unemployment relief. Furthermore, in 2010 Obama signed a detailed financial reform bill into law, legislation meant to guard against similar economic meltdowns in the future. Economic progress from the “Great Recession” has been slow, but steady. Unemployment recently fell to 5.9 percent, the lowest since the downturn.

Internationally, Obama confronted a world weary of the bellicose foreign policy pursued by his predecessor, George W. Bush. Obama’s early opposition to the Iraq War propelled him to the Democratic nomination and presidency. He helped end this war in 2011 and is winding down the Afghanistan War by the end of this year, much to the approval of a war-weary American public. Obama approved the operation that led to the death of Osama bin Laden in May 2011, and his policies have destroyed much of al Qaeda’s effectiveness. Certainly the current situation in Iraq is precarious, as ISIS threatens to overtake that country. The Obama administration has assembled an international coalition against ISIS and begun a heavy bombing campaign aimed at helping Iraqis and their allies defeat the terrorist group. While some on the left remain wary of our involvement and others on the right criticize the president for not doing enough in the conflict, Obama wisely has followed a cautious course, recognizing the necessity of confronting ISIS but being careful not to become too involved in another quagmire in the Middle East.

Obama has pursued policies that will have long-lasting effects on the country, the most notable being the passage of the Affordable Care Act. While Obamacare, as it is commonly called, remains controversial, it is nonetheless a historic achievement. Presidents for decades unsuccessfully attempted to push legislation through Congress that would ensure healthcare for more Americans. The Supreme Court’s upholding of the law and Obama’s re-election guarantee that the Affordable Care Act is here to stay. Obama has furthered the cause of gay rights, from ensuring federal prosecution of hate crimes, to repealing the military’s “Don’t Ask, Don’t Tell” policy, to becoming the first president to support same sex marriage. Obama’s environmental regulations have been marked by a dedication to combat climate change. Obama has made stellar appointments to his cabinet and to the judiciary, most notably with Sonia Sotomayor, the first Latina on the Supreme Court, who along with Elena Kagan, will bring strong progressive voices to the bench for decades.

Certainly, Obama has made mistakes and challenges remain. The White House has promoted its accomplishments poorly and allowed critics to have the louder voice, most notably with Obamacare, and has failed in its promise to be transparent to the public. Drone strikes, the NSA surveillance and the continued operation of Guantánamo Bay Prison in Cuba have disappointed civil libertarians. The president’s failure to punish Syria after crossing a so-called “red line” made him appear weak on the international stage. Obama and his party are partly responsible for the gridlock tormenting Washington, although Republicans share equal, if not more, blame. Indeed, he has encountered unrelenting opposition from Republican politicians who from day one planned to make him a “one-term president” and pundits on talk radio and Fox News who daily have excoriated him in vicious ways.

Obama faces many concerns in the final two years of his presidency, namely immigration reform, economic growth, fiscal policy and turmoil in Iraq. His ability to meet such challenges will go a long way in determining his overall legacy, something all presidents consider as their terms wind down. Obama’s past accomplishments suggest that Republicans like Abbott disregard his political capabilities at their own peril. Sometime in the future, when we look back on his presidency through the wide lens of history, being called “just like Obama” may be a compliment for which candidates strive.