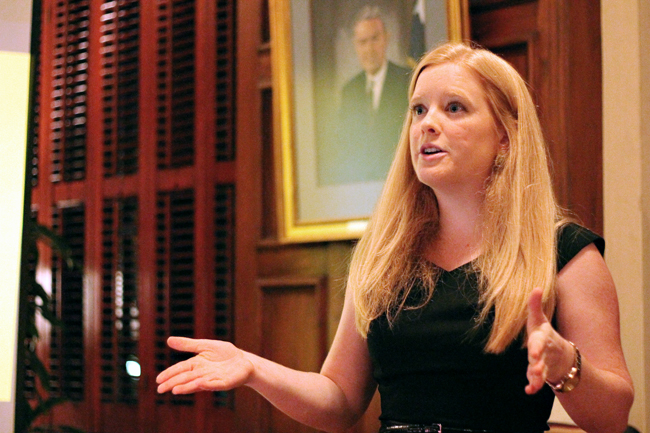 Emily Conron led the on-campus lecture, hosted by END7 at UT, and talked about the basics of the seven most common neglected tropical diseases, as well as a solution to those widespread infections.

According to the END7 campaign, the seven diseases primarily found in the southern hemisphere are whipworm, hookworm, roundworm, trachoma, river blindness, elephantiasis and snail fever.

“NTDs are really hidden diseases,” Conron said. “They’re out of sight. [However], NTDs have been around, basically, as long as humans have
been around.”

Infected people experience more long-term effects, as opposed to death, according to Conron.

“NTDs are disabling and disfiguring diseases,” Conron said. “They cause everything from swollen abdomens and limbs, to rashes that cover your entire body that can be quite painful and debilitating, to causing your eyelashes to go in on themselves and scratch your cornea until you go blind.”

According to Conron, cures to these diseases have already been found and are applicable.

“Four pills treat and protect people from seven NTDs, and they can actually be administered at the same time,” Conron said. “They’re safe. They’re so safe that we administer them to entire communities. [Instead of testing everyone], we give everyone in the communities [the] drugs once and sometimes twice a year in what we call mass drug administration.”

Money can be donated to the END7 campaign on its website to distribute the packaged pills, according to Conron.

Jesse Cortes, business and sociology senior, said he did not realize he could make a change so easily.

“It strikes [me] that there are these diseases [and cures],” Cortes said. “People should definitely have access to treatments to live normal and happy lives. Often times, you think that there are lots of issues out in the world, but this one is actually solvable.”

Jacob Jordan, chemistry junior and vice president of communication and marketing for END7 at UT, said awareness is the key to eliminating NTDs.

“One of the biggest things that makes an impact with [these diseases] is the public pressure,” Jordan said. “If more people knew about all of these diseases, like they know about cancer, or AIDS and malaria, then that public pressure to fund this type of thing would be there.”