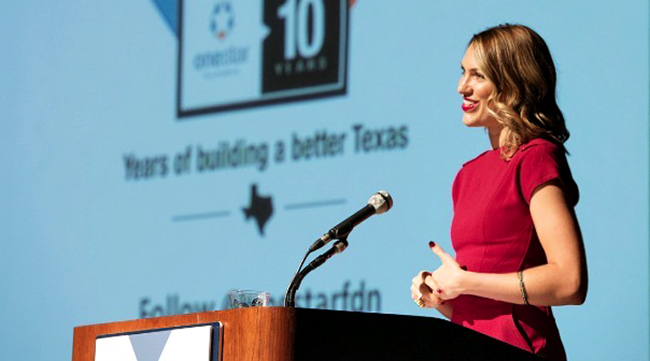 Taylor Ellison used to take everyone she met out for coffee. She decided on a changing her career from politics to television, and networking was her greatest tool at the time. After months of meeting people, she learned about the CW Austin Star role.

In 2012, Ellison, a UT alumna, auditioned for KXAN’s CW Austin Star competition. After a five-month audition process, she was chosen for the role of lifestyle reporter. This was the turning point for Ellison, as she started her career in television.

She refers to her experience as a crash course in broadcasting. Members of the CW team taught her to shoot, edit and produce. In a matter of months, Ellison was reporting from red carpets.

“I wanted to learn everything, and they wanted to teach me,” Ellison said. “I was like a sponge.”

Ellison had a segment every day on the CW about Austin culture, in addition to reporting on festivals and special events in Austin.

“It was a manifestation of what I used to say I wanted,” Ellison said.

At Texas, Ellison started out studying journalism but quickly switched her major to communication studies so she could focus on political communication. She was involved in Student Government, where she found a passion for public speaking.

After graduation, she enrolled in the Teach for America program, which sent her to work in Washington, D.C., to teach eighth graders at an advanced public school. Ellison said she valued her experience teaching, but, when the two-year program ended, she was ready for the next step.

Ellison decided the logical next step in her career was to attend graduate school. She returned to Austin and enrolled in the UT LBJ School of Public Affairs. Despite this conventional next step, Ellison began to question her career path.

“As I was applying and going through the motions, I knew inside I had these secret interests inside to try and get into TV,” Ellison said. “More specifically, talk to people for a living.”

Ellison went through a year of graduate school coursework before — with just over one semester left — she formally withdrew from graduate school to pursue her dream of working in broadcast television.

“We have one life,” Ellison said. “If we are not living this one, what are we doing? This isn’t a dress rehearsal, girlfriend.”

Natalia Egan, brand manager for KXAN-TV, worked closely with Ellison during her time as the CW Star. Egan said Ellison’s love for Austin and hard-working nature made her stand out.

“Taylor made an impact the minute she stepped into the entertainment scene,” Egan said. “Taylor has always had an innate ability to really connect to the people around her and her audience. Not only is Taylor striking, but [she is] one of the hardest working people I’ve had the pleasure of working with.”

Her CW role ended last summer, but Ellison is still pursuing television. She currently freelances and hosts events in Austin.

“I want to try and cultivate conversations of substance and meaning and be a force for good through shared conversations,” Ellison said.

Ellison hopes to develop a platform to showcase Austin culture. For now, she spends her time developing this idea through interviews on her YouTube channel and appearances at events in town.

“It’s all possible, you just have to believe it’s possible,” Ellison said.