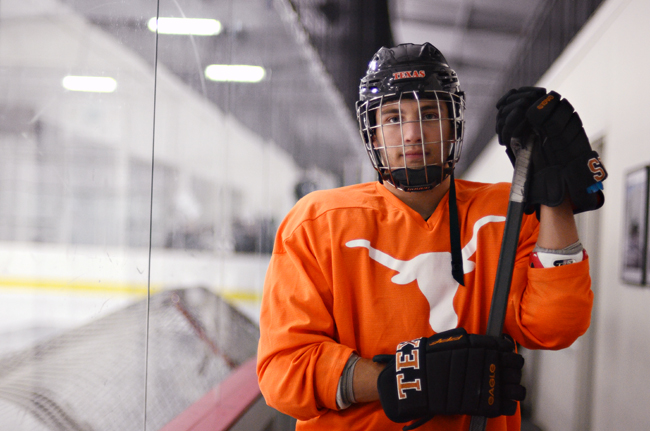 As Texas hockey headed into overtime, tied 6-6 with Texas State University, sophomore Spencer Delman skated the puck out of Texas’ zone, dodged a defender and, approaching the face-off dot, shot the puck. To Delman’s surprise, the puck blurred past the goalie’s shoulder, pushing Texas past the Bobcats.

Delman has become the top Texas player in both goals and assists because of plays like this.

“Spencer provides a lot of scoring power on offense and helps out on the back check,” junior teammate Greg Doll said.

Before moving to Texas for college, Delman began his 16-year hockey career in the north. He learned to figure skate at age 3 and began playing recreational hockey at age 6.

“I played travel starting at age 7 or 8,” Delman said.

Delman continued his travels for hockey throughout elementary and middle school, eventually joining the Northbrook Hockey League Bluehawks, a nationally ranked high school team. On the Bluehawks, Delman played forward and scored his way to a starting position his junior and senior years, serving as captain senior year and making the All-Illinois High School Association team on the highest level.

“Hockey was a thing my dad did his whole life, and it was something he was very passionate about, so it was always prevalent in the house,” Delman said. “It was definitely not forced upon me, but it sparked my interest, and he was happy that I was happy about it.”

Delman, a computer science student, applied to Texas and hoped to continue playing hockey once he moved.

“My only parameter for anywhere was that hockey existed,” Delman said. “It did not matter in what capacity.”

While the sport isn’t as popular in Texas, he still watches hockey games regularly, specifically his favorite team — the Detroit Red Wings.

“Spencer, coming from the north, plays with a different style,” coach Aubrey Berkowitz said. “He’s scrappy, a high-energy player, and a lot of people have a hard time keeping up with him.”

Delman’s short, 5-foot-6-inch stature plays a significant factor in how he competes, so he models his techniques after the Chicago Blackhawks’ Jonathan Toews and the Detroit Red Wings’ Pavel Datsyuk.

“They’re known as people who see the ice well,” Delman said “They’re both incredibly hardworking, and both make a lot of smart plays.”

Depending on the personnel on the ice and the situation in the game, Delman plays center and forward on the ice interchangeably. But off the ice, Delman’s character prevails, according to junior Chet Danto, assistant captain and president of the team.

“He’s a very intelligent person and always has a fun fact no matter the subject of the conversation,” Danto said.

Delman has clear hopes for his future in hockey.