Where are they now: Texas LG Kasey Studdard 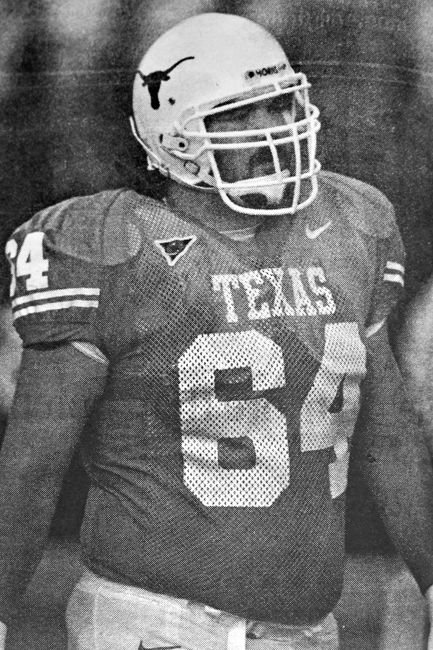 But he never thought about what he was going to do after football. It was all football, all the time, growing up.

When Studdard came to Austin, he was the fifth in his family to put on the Longhorn jersey. His grandfather was the first. His uncles donned the burnt orange as well, in addition to his dad before 10 years with the Broncos.

While at Texas, Studdard helped anchor an offensive line that paved the way for the highly ranked rushing team during his sophomore and junior years. In his senior year, he was a captain and first team All-Big 12.

After four years of protecting Vince Young and Colt McCoy, Studdard followed his father’s footsteps to the NFL. He was drafted in the sixth round of the 2007 draft by the Texans. But, after five seasons, he was cut.

“It’s a business,” Studdard said. “I knew I still had something left, but I really didn’t want to deal with knowing if I was going to play again or not. I learned I wasn’t as good as I thought I was.”

In 2013, his football career came to an end and his post-football life began. So what does Studdard do now?

He hunts, fishes, talks sports and cooks crawfish — all in Austin.

He has his own fishing show on the Longhorn Network: “Hook, Line & Studdard.” The show has aired for one season, with a new season coming soon.

“I’m getting that going,” Studdard said. “I enjoy being out there in the wild. It’s peaceful out there. Sometimes I’m in the helicopter shooting pigs or offshore bringing in a 100-pound tuna.”

As for his crawfish business, he is just getting it off the ground.

Studdard Crawfish isn’t a place yet. But that didn’t keep former Texas head coach Mack Brown from trying it.

“Kasey Studdard is starting a crawfish business. Everyone needs to go eat his food when he gets it up & going. The man can cook,” Brown tweeted back in May after going to one of Studdard’s crawfish boils.

But, most importantly to Studdard, his new life involves a family. Six months ago, he got married to a fellow Longhorn.

“I couldn’t marry outside the Longhorn family,” Studdard said. “That was [a] must in my book.”

Studdard doesn’t want to coach, instead focusing on spending time with his family. However, he did get the chance to be around Texas’ practices before the season started.

“I don’t know if they’re old enough to remember how good he was,” head coach Charlie Strong said. “Kasey comes out some days. When you have an alum, a player who was so good, for him to just talk about how important a team is and how it was when he was here in those old days.”