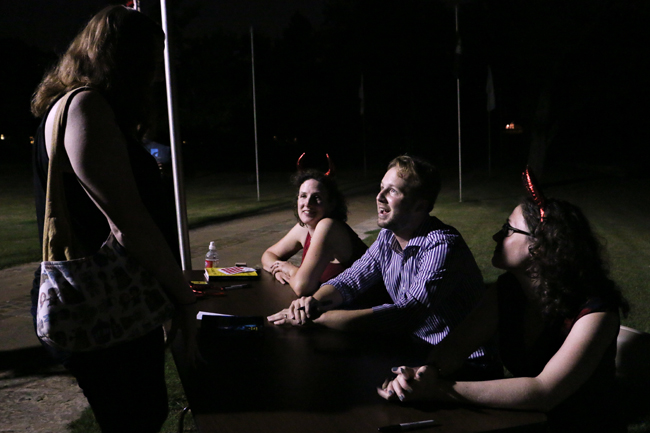 The Texas State Cemetery was teeming with storytellers and frightened guests Saturday night. Crowd members passed out devil horn headbands, and lightning bugs lit up the eerie darkness among the head stones as guests filed in to hear live readings from three different authors. This event, the Graveyard Reading, is one of many unorthodox literary events hosted yearly by the Texas Book Festival’s Lit Crawl.

Stephanie Opitz, co-organizer of the Lit Crawl and literary director of the Texas Book Festival, has been working on recruiting authors and venues to participate for the past four years. Opitz said events such as Lit Crawl appeal to a wider audience who is interested in a literary community, as well as to authors who want to share their work in a new context.

“It allows authors, who are maybe more performative or have quirkier stories, to present them in an environment that really suits that,” Opitz said. “There are a lot of different ways you can see authors being themselves a little bit more.”

During an increasingly technological age, where books are read online as e-books or listened to via podcasts, Lit Crawl reflects the changing climate of the literary community. The event incorporates authors into the community in a fun way, making them accessible to their readers.

Opitz said that the popularity of interactive events such as Lit Crawl has increased across the country in recent years in an effort to be more inclusive.

“That’s definitely the hope for everything,” Opitz said. “It’s a great way to find a wider audience.”

“Austin is an extremely literate city; people are much more engaged,” Mukherji said. “There are people who enjoy that intersection of life.”

Mukherji said the Lit Crawl can even show people a bit of Texas history when it intersects with an event such as the cemetery readings.

“Texas has such a distinct and really unique history compared to the other states,” Mukherji said. “The history of Texas as seen by the people who were buried there was really interesting.”

Mukherji explains that there is a young community in Austin very interested in enjoying literature in a fun, social environment. The Lit Crawl offers this during the exciting time around Halloween.

“The fact that they are able to bring really prestigious luminaries from the literary world from all around the world is such a treat,” Mukherji said. “I’ve seen it grow from this contained weekend experience to this extravaganza with all these venues getting involved with literature.”

Both Mukherji and Opitz agree that interactive events are important to help a growing population share their love of reading with one another.

“It gets more people excited about books,” Opitz said. “That’s why we need it.”