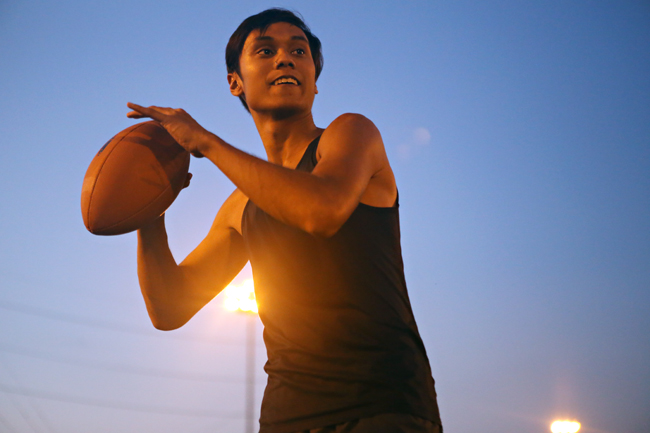 The moments when everything comes down to one play, when it is do-or-die, when it means the difference between celebrating or accepting defeat — those moments are where Andre Chelliah, English language sophomore and co-ed flag football quarterback, thrives.

“I like the attention, and I thrive under pressure,” Chelliah said. “I’m super aggressive, and I like to run. We never huddle. I like to call plays and make them line up really fast, and it’s confusing for the other team.”

Under pressure, Chelliah has been able to make game-winning plays and touchdowns, giving his team a last-second lead. Although he may be a self-proclaimed “diva,” Chelliah said he doesn’t celebrate his game-changing plays.

“I never celebrate because my dad always told me when I was growing up, ‘Act like you’ve been there before,’” Chelliah said. “So I take that as my own personal philosophy — I act like I’ve been there before. There is no need to celebrate, like it’s a normal thing for me. I just hand the ref the ball, walk off the field, high-five some teammates and get ready for the next drive. Just as much as I’m a diva, I try to keep it modest.”

Chelliah and his teammates are a part of the Vietnamese Students Association, who formed the team “Only Tight Ends.”

The team suffered their only loss to the Filipino Students Association, which put them at a record of 4-1. But, despite a winning record, the team would not have made it to playoffs if they had not volunteered to play an extra game against a team from a different league.

“After that loss to FSA, some of us were kind of deflated because we knew we weren’t going to make it to playoffs, but we stuck with it, and we actually got rewards,” Chelliah said. “We’re stoked about it.”

Emily Tran, electrical engineering freshman and offensive blocker for the team, said facing probable disqualification from playoffs pushed the team to work harder and said the team bonded because of the extra effort.

Sunday, in the first playoff game against “Royals-Delta Chi,” the team shut out their opponent 32-0.

Chelliah said he knew they had the advantage going into the game, but they made sure not to let it affect the team’s ability to perform.

“I didn’t really feel a lot of pressure after I saw their offense perform; I knew we had the game in the bag,” Chelliah said. “From there, I just had to focus on keeping the team calm, playing our game and [avoiding] stupid mistakes that we could possibly make from being careless or overzealous.”

And on Wednesday, the team will have its second chance for postseason success in its second playoff game against “L1FEWAY YAY.”