Despite a disappointing season, Cedric Reed has no regrets 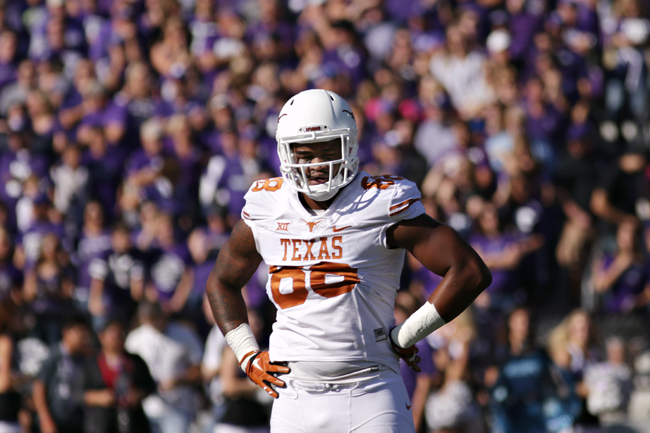 Heading into the 2014 season, plenty of eyes were on senior defensive end Cedric Reed and his ability to anchor the Texas defense. Last season was thought to be Reed’s coming out party, as the junior collected all-conference honors in his first year starting for the Longhorns, and things were only supposed to go up from there.

Reed was one of two FBS players — the other being Khalil Mack, who was the fifth overall pick in the 2014 NFL draft — last season with at least five sacks, four pass breakups and five forced fumbles.

But, after recording 10.0 sacks a season ago, Reed has only recorded a meager 1.5 this season with two-thirds of the year in the books.

“I beat myself over it every night,” Reed said. “My numbers aren’t the same as they were last year, and they’re definitely not the numbers I expected.”

With his collegiate career nearly over, Reed acknowledged that his performance this season will likely have a negative effect on his draft position.

“It’s football; you know stats got a lot to do with it, and my stats aren’t there,” Reed said.

Before the season, Reed was named to several watch lists for national awards, such as the Chuck Bednarik Award and the Bronko Nagurski award. But with his performance thus far, Reed is unlikely to be a semi-finalist for either.

“I take full responsibility for my play this year,” Reed said. “I’ve been hearing a lot about it. But I’m trying every day. I’m giving it all I got on the field.”

However, in certain aspects, Reed believes he has proven to be a much better player than in the past.

“I’d say I’m a better run stopper,” Reed said. “Last year, I was a great pass rusher, and I’ve probably been doing a lot of run stopping better this year.”

Texas defensive coordinator Vance Bedford can attest to Reed’s high level of play against the run.

“We play some odd defense. We’ve put him in four-technique with his head up to help us stop the run, and, when you look at that, he’s done a great job,” Bedford said. “A guy is 6-foot-6, and he plays long; it’s hard for guys to get into his legs, so he’s able to handle two gaps.”

“We told him, ‘Hey, you go fall on a grenade for us right now. Keep these guys off our backers,’ and all of a sudden, that linebacker has 17 tackles,” Bedford said.

Still, though, the senior would like to boost his numbers in the closing games of his Texas career.

“I’m going to be playing a lot more on the left, like I used to,” Reed said. ‘”I’m going to try to get back to what I used to do well when I had good stats.”

Despite being disappointed by his play and the team’s struggles, Reed doesn’t second-guess his decision to return to school.