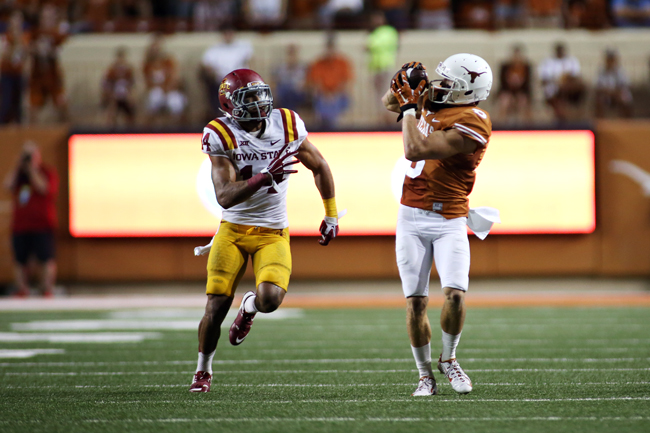 As far as adversity goes, it’s tough to imagine a group of Longhorns that has been through more than the current fifth-year seniors.

Before they arrived at Texas in 2010, Mack Brown had lost a total of 27 games in his first 12 years as head coach, and the program was coming off a loss in a national championship game that just might have gone the other way if former quarterback Colt McCoy hadn’t had his shoulder crushed.

The fivesome surely had similar aspirations, imagining 10-win seasons and national championship runs as the norm when they first arrived on the 40 Acres five years ago.

But for Jordan Hicks, John Harris, Demarco Cobbs, Dom Espinosa and Greg Daniels, the last half-decade hasn’t gone quite as planned. All off-field issues aside, the veteran group has lost 26 games over that span, failed to reach double-digit wins in every season and never experienced a BCS game, let alone a national championship. In their first year, they didn’t even make a bowl game.

Now, in the midst of another disappointing season, the elder statesmen and the rest of Texas’ senior class serve as motivation, as the Longhorns look to avoid missing the postseason yet again.

“We can’t allow the players to check out because we still have games to play,” head coach Charlie Strong said. “You want to see the seniors walk out of here the right way. Their careers haven’t been great for them.”

“Not great” is an understatement, especially for the five guys that were around the last time the Longhorns missed out on bowl season.

All freshmen at the time, the fifth-year seniors understand how damaging it can be to an underclassman’s psyche if he doesn’t get a taste of success early on.

“It’s frustrating to think that I could leave here as a senior like I did when I came in as a freshman — 5-7,” Harris said. “That’s not a mark I want to set a trend for, for these younger guys, because that’s a trend that doesn’t need to continue.”

Despite all the struggles — and maybe even because of them — Texas’ upperclassmen have served well as leaders on the team. Younger players often speak of how much they admire and respect the way the veterans on the team carry themselves, and the coaching staff continues to harp on how impressed they’ve been with the leadership in the locker room.

Strong knows that while getting to a bowl game is something he wants to do for the seniors, it’s that same group that will have to be the ones to get them there.

Based on what we’ve heard all week, the seniors understand how badly their coaches and younger teammates want to send them out on a high note. They’d like to return the favor.