Swoopes, Gray among three who need to step up 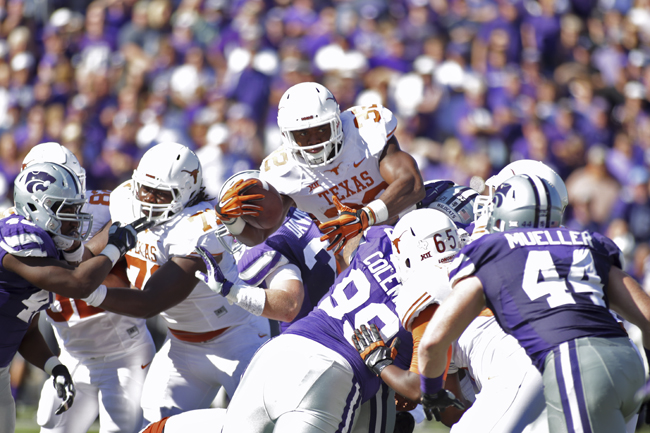 Before the Kansas State game, sophomore quarterback Tyrone Swoopes appeared as if he had turned the corner. Swoopes had put together two phenomenal performances against Oklahoma and Iowa State, putting up a combined 655 passing yards, three passing touchdowns, 145 rushing yards and two rushing scores.

But Swoopes took a step back against Kansas State. The quarterback from Whitewright, Texas, struggled mightily against the Wildcats, only throwing for 106 yards in the Longhorns’ first shutout loss since 2004.

Now, Texas, 3-5, needs Swoopes to step up and play as he did against the Sooners and Cyclones, because the Longhorns need to win three games to become bowl eligible.

It hasn’t been a good year for the Texas running backs. With a young offensive line, there haven’t been many holes to run through. At times, the line has also struggled to keep pressure out of the backfield.

While the line is responsible for many of the Longhorns’ problems, junior running back Johnathan Gray has had his own struggles this season. Gray, who is coming back from an Achilles injury, hasn’t looked as good as he did in his first couple seasons. He appears a step slower and doesn’t have the agility he once had.

This season, Gray has only amassed 369 rushing yards and two touchdowns, while his teammate, senior running back Malcolm Brown, has found the end zone four times and has rushed for 417 yards.

The Longhorns need help offensively, and if Gray can spark the running game, that would be a big help.

For the most part, the Texas defense has been the cornerstone of the team. But junior cornerback Duke Thomas has been hot-and-cold this season.

Thomas got burned on a double-move against UCLA, which allowed the Bruins to score the game-winning touchdown.

Thomas followed that disappointing performance with two interceptions against Kansas and then snagged another interception against Iowa State to raise his season total to three.

But, against Kansas State, Thomas once again got burned on a double-move, which set up a Wildcat touchdown.

The Longhorn defense has been solid this season, but, in order to be better, it needs Thomas to step up and be more reliable.