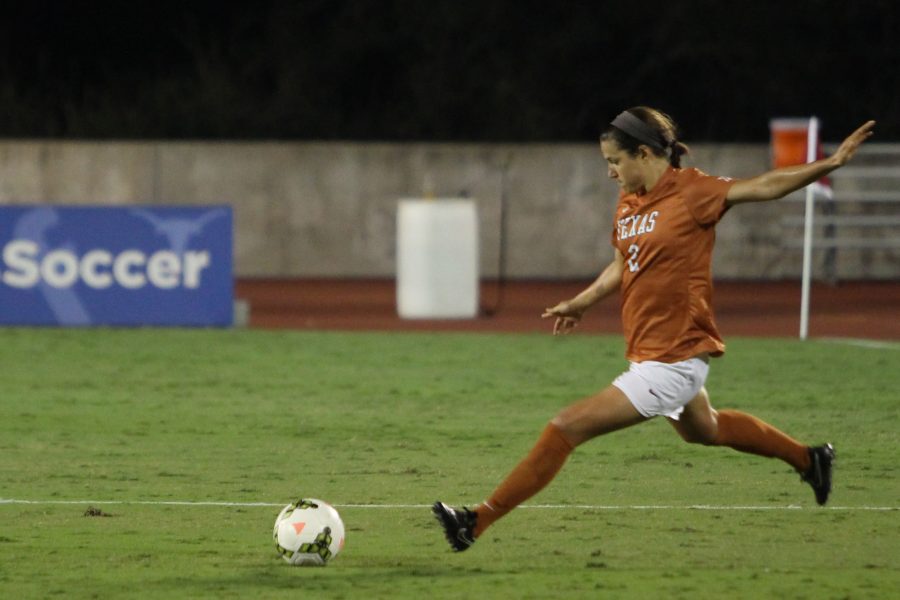 Last Friday, Texas was clinging on to the last spot in the Big 12 tournament. The Longhorns had dropped three of their last four conference games and were travelling to battle tough conference foes Oklahoma and Baylor.

The weekend ended with Texas stealing two close wins on the road, including a thriller against Baylor that came down to a goal by sophomore midfielder Julia Dyche in the last minute of regulation.

“In this league, it’s fantastic any time you can have success, especially on the road,” head coach Angela Kelly said. “Getting away wins is a really difficult challenge, and I’m really proud of our team. It was a tremendous success for us and our program.”

Texas will hope to carry its newfound confidence back to Austin when it takes on Oklahoma State on Friday at 7 p.m., the first matchup between the two since the Cowgirls eliminated the Longhorns in the first round of last year’s Big 12 tournament.

Oklahoma State, though, could be the obstacle that halts Texas’ momentum before the conference tournament this season. The Cowgirls are a respectable 9-8-1 on the season but have rolled to a 4-2-1 record against opponents from the deep Big 12.

The Oklahoma State defense, led by senior keeper Rosa Medina, is far from perfect, conceding 1.28 goals per game to Texas’ 0.89 mark, but the Longhorn attack still has to prove it’s capable of capitalizing on a poor defense.

“Its all about us,” Kelly said. “We aren’t going to be reactive; we’re going to be proactive. That’s been our message since day one”

The Cowgirls could finish as high as second in the conference rankings if they can knock off the Longhorns. Fortunately for the Cowgirls, the team knows a thing or two about playing in high-pressure situations. Head coach Colin Carmichael has ushered Oklahoma State to the NCAA Women’s Soccer Championship tournament in seven of the last nine seasons, and his team has won four of the last six Big 12 titles.

Texas’ emotions in the regular season finale will only be compounded by the fact that some of its best players could be walking onto the pitch at Mike A. Meyers Stadium for the last time in their careers.

“The four years have blown by, and I can’t believe its already my senior night,” defender Brooke Gilbert said. “Being able to play with my best friends and us seniors who have been here since the beginning and then just being able to share this moment with them on my senior night is — I can’t even describe it.”

“Whatever happens, we know that we have the ability to beat anyone,” Gilbert said. “We just beat two big opponents, so we can take anyone, and especially Oklahoma State, at home. We’re more than ready.”