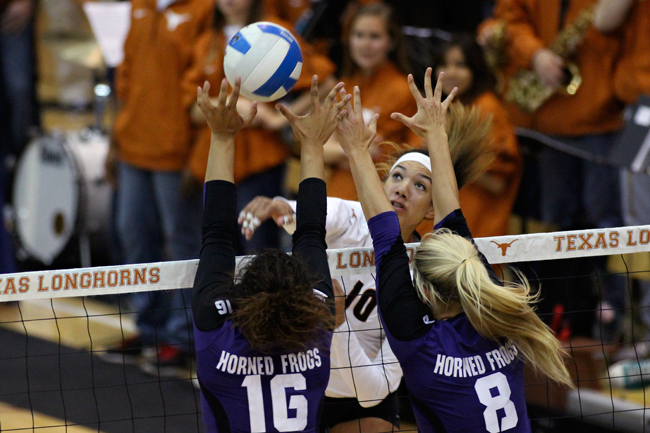 “I thought it was a good situation for us to be in,” head coach Jerritt Elliott said. “This is a tough gym, and we were a little uncomfortable at first. … After the break, we kind of calmed down and found our unit and groove and played a lot better.”

The Longhorns were able to settle down thanks to solid play by senior outside hitter Haley Eckerman and junior outside hitter Amy Neal. Neal had 14 kills and 16 digs in her first game since Kansas State on Oct. 18. Eckerman, a Waterloo, Iowa, native, recorded 14 kills and four digs in a homecoming game. Elliott said he liked Eckerman’s play against the Cyclones.

“This is her home state, and I know she had a big crowd here tonight,” Elliott said. “She wanted to play extremely well. Her game is continually improving as the season goes along, and it’s great.”

Eckerman started her dominating performance early with seven kills in the first set. The Cyclones managed to keep the set close throughout, but Texas was able to separate itself from Iowa State after a 9-9 tie, and although the Cyclones tried to fight their way back into the set, Eckerman and the Longhorns pulled off a 25-21 win.

The second set was a different challenge, as the Longhorns committed a handful of errors early in the set that allowed the Cyclones to build a 15-13 lead. The errors set the tone for the Longhorns, who were unable to recapture the lead and lost the set 20-25.

“We were still pressing a lot, trying to find our rhythm and making a lot of errors [in the second set],” Elliott said.

The Longhorns, however, were able to find their rhythm in the third set, as they jumped out to an early 5-2 lead and never looked back. Texas took the third set, 25-13, and took a commanding 2-1 game lead.

The Longhorns will return to action against Texas Tech in Lubbock at 6 p.m. Wednesday.