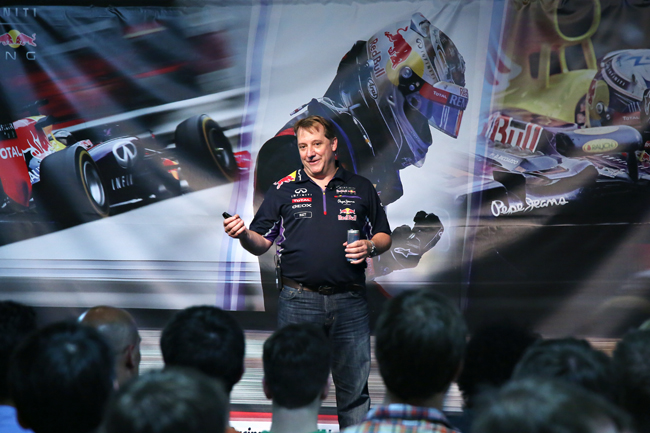 Exhaust fumes masked the view of the Capitol. Crowds lined the street to watch the red and blue metallic blur rip through the city. The 750-horsepower Formula One race car came to a halt, revealing the familiar Red Bull logo.

The Infiniti Red Bull Racing team kicked off Formula One week in Austin with this live demo on Congress Avenue on Wednesday. But, according to Matt Cadieux, the team’s chief information officer, racing involves more than the speed and suspense viewers see on the track.

“It’s just as much a war between geeks and engineers as it is between drivers,” Cadieux said.

Students in UT’s Society of Automotive Engineers, or SAE, understand this behind-the-scenes role. Several society members are creating a race car of their own as a part of Longhorn Racing, the University’s racing team. The group builds a $30,000 open-wheel race car to race at national competitions
every year.

Red Bull invited the society to hear a lecture given by Cadieux and see one of its Formula One cars in person Wednesday at Austin Speed Shop. This is the second year Red Bull has hosted a Formula One lecture, but, this year, the company drove students from UT-Austin and UT-San Antonio to the speed shop for the event. The lecture was streamed live to 14 other campuses across the nation.

“It’s nice talking to young people about cool jobs and inspiring them to remain technical and passionate about what they are doing,” Cadieux said. “This is a sport where engineers can influence who wins a sport — who wins the championship.”

“As a whole, our organization is geared towards getting our members in contact with companies involved in the automotive industry,” Lopez said. “F1 is the poster child for racing around the world, and to get an insight on what it takes to be a part of the team is extremely beneficial for our members.”

Matthew Richardson, mechanical engineering junior and SAE member, grew up around racing and said he was eager to attend the event.

“Formula One cars are really cool, and the amount of money and engineering that goes into them is pretty insane,” Richardson said. “They have multiple supercomputers on each team, and millions of dollars go into it.”

During the lecture, Cadieux discussed his work in the field and recent changes to the team. As chief information officer, Cadieux develops applications used to design and create the cars. Since last year’s lecture, Infiniti Red Bull Racing has made several design changes, in addition to altering some regulations. At the 2013 German Grand Prix, a pit stop gone wrong led to an injury, and the team had to rework its pit stop strategy to ensure increased safety in the future.

“The car is an evolving prototype,” Cadieux said. “We have hundreds, sometimes thousands, of new parts introduced for every race. We have an attitude to be innovative and keep pushing boundaries.”