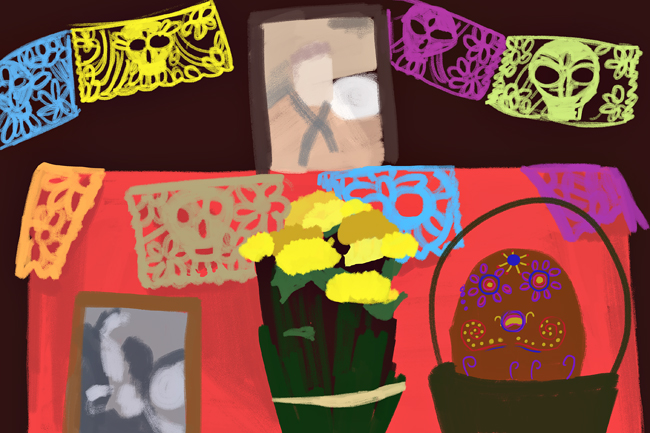 In preparation for Día de los Muertos, students from various campus organizations gathered to paint tiny 3-D skulls for their altars. The skulls are not decorations meant to spook passerby — they are meant to commemorate the dead.

Sigma Lambda Beta, a Latino-based fraternity on campus, will host a Día de los Muertos celebration Monday in the Main Mall. One of the many co-sponsors for the event is the Center for Mexican American Studies. The keynote speaker at the event will be Rachel González, assistant professor in the Department of Mexican American and Latina/o Studies.

While Mexico recognizes the celebration as a part of its indigenous cultural history, it is not practiced as widely in the U.S.

“Families decorate grave sites and spend all night eating and drinking in honor of their departed love ones whose spirits are believed to return to earth to visit during this time of group remembering,” González said. “In the U.S., this is less a part of celebrations because social norms in the U.S. often prohibit such behavior in public cemeteries.”

According to González, Día de los Muertos is a commemorative practice found in different cultural communities around the world. These practices are the result of religious syncretism, or the blending of religious beliefs and practices of communities present in Mexico before and after the arrival of Spanish colonists.

“Día de los Muertos does not signify a morbid love of death,” González said. “It is a time of both reflection and celebration and is an affirmation of the sweetness of life.”

For Alejandro Alvarez, head of the Día de los Muertos committee and member of Sigma Lambda Beta, the event is an important way to relive the tradition he practiced in Mexico.

“It’s an event that is so rich in culture,” Alvarez said. “It kind of gets lost when you come over here. As one of our principles with cultural awareness, we are trying to educate people about different cultures.”

Tamales, rice, beans, aguas frescas and pan de muerto — or “dead bread” — will be available for the audience. Different organizations on campus will create altars, or tables with offerings for departed loved ones to represent their group.

“Families put out the favorite food treats of their departed loved ones in the hopes of luring them home,” González said.

“What I really want to see is more people outside of the Latino community coming out,” Reyna said. “Even if it’s just for the food that they come, they are going to get something out of it.”