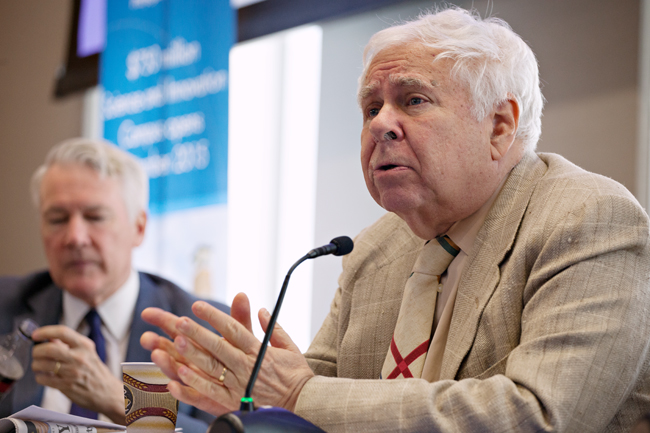 During a discussion on constitutional law Friday at the SAC, UT law professor Sanford Levinson said a constitutional convention could address some of the causes for the gridlock in Congress.

According to a Gallup poll conducted between Oct. 12-15, 86 percent of Americans disapprove of Congress’ performance, which Levinson said stems from Congress’ inability to pass legislation on important issues. Levinson said extensive veto points in the House, Senate, presidency and the courts have allowed congressional gridlock to worsen.

“You can block needed changes from happening if you control just one of those,” Levinson said at the discussion. “It’s much easier to play defense and prevent the passage of legislation than playing offense and trying to get something through.”

Levinson said congressional gridlock could deteriorate in the future.

“The American political system is in fairly dire straits,” Levinson said. ”I have hunches that we’re drawing toward a cliff, and it would be far better to address our problems then as we go over the cliff.”

Constitutional restructuring is not common, according to Bobbitt, but when a restructuring does occur, it usually happens in the aftermath of a war, such as World War II, which caused Germany and Japan to enact new constitutions.

“If your geopolitical existence is in great peril, I think it’s time to consider the rebuilding of a constitution,” Bobbitt said. “I don’t think we’re there.”

According to Levinson, a national conversation about changes to the constitution has not entered the mainstream yet. Levinson said many politicians see the possibility of a constitutional convention as futile, which deters investments in this issue.

“Nobody profits from the world of political leaders or prominent pundits to talk about it,” Levinson said.

Levinson said the United States should not wait until it has reached a moment of crisis to address issues, which he said could lead to a crisis.

“Do we have to wait for the train wreck, for the war, for the depression, for however you want to define the crisis in order to respond and to re-patch under extreme conditions what will appear to be an adequate response?” Levinson said.